A Cruise With Purpose by Bob

Retirement brings a new round of challenges in most of our lives. The slick ads of retirement villages paint a glossy picture of a lifestyle full of fun, relaxation and few cares, a picture which rarely plays out in real life. Compared to the glossy brochures, we saw an opportunity to get involved with some of the poorest people in the world and make a difference in their lives. For my wife and I, this opportunity to be involved in something real, was irresistible 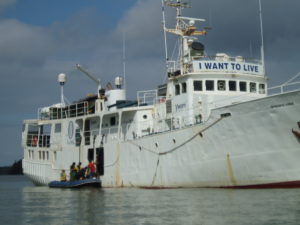 We set sail on a beautiful Port Moresby morning, and as we motored out of the harbour with hills of Moresby, at our stern the Captain of this onetime Japanese fishing vessel, pointed the bow to the west and for the next 23 hrs we would be heading for the remote Gulf region of Papua New Guinea.

As I stood at the stern railing, watching the white water churning as the propellers thrust us forward, I contemplated what lay ahead and how things transpired that we should be involved on this mission. This was not the heroic wartime missions that the previous generation of my family experienced in these waters, this was a mission of mercy to the countless people in these remote areas who lived very much a third world existence . These people etched out their lives in jungle villages dotted along the muddy riverbanks of the vast inland river systems in this area. Health and medical care is very limited in this region and prior to this service being instigated a few years earlier, the prospect of getting some sort of basic medical help was usually at the end of a 24hr canoe paddle or not at all.

Some 7yrs earlier this NZ-based ship (now replaced with amore modern one) had arrived in our hometown of Southport on the Gold Coast. It was operated by a group called YWAM Medical Ships, a nondenominational Christian organisation. The group visited a number of local Australian schools, organisations and churches and invited people to come aboard and come on board with this unique operation. We took up the opportunity to see the ship and hear about their mission.

On this occasion however, I was operating a solo dental practice and had three teenage daughters and didn’t feel the time was right for me to be involved other than becoming a financial supporter. Roll forward seven years, all daughters married and retirement now actuated, the ship made another visit to our city and my enthusiasm was stirred once again. Stationed now in Townsville with new owners, YWAM Australia, the ship was no longer servicing Fiji but our northern neighbour Papua. A boyhood fascination of Papua and a love for anything nautical and a strong desire to use my skills to share God’s love with these people, prompted me to submit applications for both my wife and myself to get involved in an upcoming outreach. Paperwork, injections, airfares sorted, time passed quickly and before long the wheels of our flight had touched on the tarmac of Port Moresby airport.

We were met at the airport by members of the team who provided our minibus transport to the ship dock, a 20min drive to the western side of town. The streets of Moresby seemed to be crowded with many young people who seemed as if they were living displaced lives and had nothing to occupy their time. 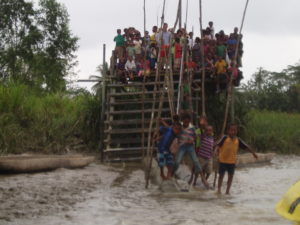 There were many properties barricaded behind 6ft chainmail fencing, topped with barbed wire, and this confirmed some of the stories we had previously heard about Port Moresby and was later reinforced by our mission leader with warnings about entering the town confines alone. Once at the wharf we were unloaded and set about acquainting ourselves with the other team members and the ship. This group of people, ranging in ages from 16 to 65 and representing 14 nations with some skilled, many unskilled had two things in common. So many people came here to volunteer their time and fare, and each had a desire to be part of bringing health and life to the full. The majority of the team shared accommodation below deck with men separated from women in very confined sleeping quarters unchanged from previous history as fishing vessel. My wife and myself, as a married couple, and one of the professional volunteers were afforded a private room, and whilst this was still very basic was none the less still much welcomed by both of us. The trip from below deck, up narrow stairs in a heaving sea in the middle of the night, was one much more suited to the younger members. That being said we were not pampered in any other way, and each person was rostered to take their turn at the regular duties of washing up after meals and some of the cleaning duties or even share late night watches on the bridge.

The First Day At Sea

After a peaceful first night at the dock and for those that seasickness might be an issue, a moderate breakfast was the order of the day. Once completed, it was time to sail and the captain exhibited his skills with this vessel effortlessly manoeuvring the ship from the dock, to harbour entrance, to open blue water. We were pleased to have Jeremy as the captain as he had gained an intimate knowledge of these waters over the past two years, and was responsible for doing a lot of the charting on these previous visits. Even with such knowledge, Jeremy later displayed the vigilance that is needed, as we entered the mouths of the river systems, knowing full well that the channels may change from one year to the next.

This first day’s sail proved to be uneventful with beautiful weather and calm seas. The lack of bird life, other ships, and sea life, was a surprise to me and the latter in particular. One of my other passions is fishing and I had read many tantalising stories of fishing in Papua and if the opportunity afforded me on this trip to verify the stories then I would take it. I had already tried at the docks before we set sail with no luck and I was now keen to see what secrets the deep blue water had before we reached our destination. Another team member also a dentist and also named Jeremy shared this passion, if not so much for catching fish but eating them. Jeremy had managed to find a handline with heavy line and within a short period of time had fashioned a lure and set it astern to catch our dinner. After dragging that lure for over a hundred kilometres and coming up with one small mackerel, I felt that perhaps the stories were just fishing stories and that further attempts may be just as futile. This was later to be confirmed, when all we managed to catch were small catfish. This being said the locals fared much better, and we put this down to the fact that we were confined to fishing off the ship in the deeper parts of the rivers.

Getting Ready for the Rush.

Having left the open sea, we motored up one of the large rivers of the area, and sought out an anchorage adjacent to the village we would be engaging with the following day.

At this point the operating rooms for the dental teams were set up, allocation of team members and familiarisation of operating procedures and equipment was undertaken. Other team members of the optometry, medical, physiotherapy, community development and training teams underwent similar orientation whilst others used the zodiac craft to take a group of team members to the village to meet with leaders and organise the following days activities. The acceptance and rapport that YWAM had established, was no more evident than in those villages that had been visited in previous years. Often we would see the villagers all come out to line the riverbanks as a welcoming party on our arrival. The initial shyness of the first time meeting has been completely replaced by open welcoming arms of what seems like long lost friends.

The needs are great, and because time is limited, all the urgent cases and those in pain are usually attended to by the dentists and health education is carried out by the assisting team. The days were busy but the work proved to proceed without the stress levels that modern private practice entails. The work was restrictive in the sense that, for the main part, only the urgent things could be attended to, and at other times a child with cleft lip and palate or cancer case would present and there was nothing to offer these people due to the complex

and sometimes advanced nature of the problem.

This frustration however, was countered by the knowledge that this service was starting to chip away at the vast need and with each successiveoutreach things would continue to improve. The other great feeling of satisfaction came from the great thankfulness the people displayed to us for coming to help them and for me this has been an enduring memory.

The experience was remarkable in many ways. We gathered together with many previously unknown people, mostly under twenty five years of age from all over the world. Many had never been on a ship before, many unacquainted with the roles they would be undertaking in a few days. To then be immersed in the tough and simplistic life of this third world area, can be a real challenge. What transpired though, was the development of a cohesive group of people, with a common bond of mind and spirit, who delivered quality health care and community aid to the forgotten people of Papua. There was not only great care and camaraderie displayed with our new found fellow volunteers, but also a great reward in friendships established in training and treating the Papuan nationals.

Would I do it again? Yes – and the door is still open if others want to join in.