Where is this taken?

Unless your geography is better than mine, or you have been cruising around Australia in the last few years, I doubt that you have ever heard of the town of Alotau. The name means “peaceful bay”. If you are Australian, you probably have heard of the bay on which it sits – Milne Bay. I remember hearing of this place at almost every Anzac day service I’ve been too. It’s usually mentioned along with places like Tobruk and El Alamein in Northern Africa and places in Europe where Australian troops served in World War II. It is situated on the eastern end of what looks like the dragons tail of Papua New Guinea. It is the place where an invading Japanese army suffered a defeat in a land battle. Their intelligence had let them down badly because the Japanese believed there no more than a few hundred troops defending the airstrip. There were actually almost 9,000 Allied troops including two Australian infantry brigades. The Allies also had the additional advantage of having air support close at hand. 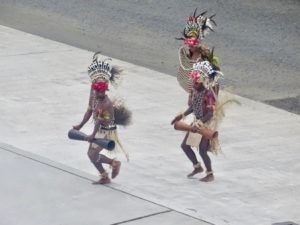 Arriving in Milne Bay, we were greeted by the tropical heat on an overcast day. The heat was no surprise. The threatening rain clouds were no surprise. But the dancers on the wharf were! There were dressed up in the ceremonial costumes typical of PNG and included young and old, male and female. All seemed so happy we had visited that day.

The town itself reminded me of many other towns in tropical island nations spread throughout the pacific. The streets were bitumen strips joining together the many potholes. The cars were old and although familiar brands, they often were different models to the ones we see in Australia.  There were shops, many in galvanised iron sheds, lining the street into town but going into one of the shops you discover they dodn’t have electricity and it is a little too dark to choose anything of worth.

A visit to the cultural centre was again a pleasant surprise. It was a short bus ride from the ship to the centre. There they had many more dancers in groups of 20 or so along with singers – some soloists, some in groups, and sellers of various local goods at the makeshift market set up for the ship.  They typically offered shells, mats, bracelets and carved wooden shapes of all types – many of which were brilliantly made.  There were also a couple of warriors who tried to look as scary as they could. The charm of the children, friendliness of the locals (even the warriors posed for a photograph) and overall quality of the entertainment was much more than I expected. I was never sure whether to give them money for their trouble or whether they were employed by the centre, but I did see one woman who was better prepared than me, giving colouring books and pencils to the children. 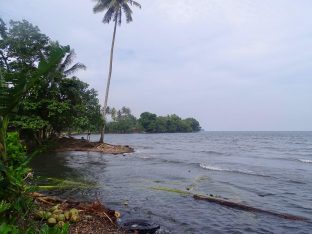 But the biggest surprise of all, was visiting the historic sites. Firstly, we were taken to the Japanese landing site. Late in the evening of 25 Aug 1942, around 1200 Japanese troops landed in 11 landing barges. These troops were reinforced by another 900 during the next few days. The Allies were not totally surprised by the landing as they had caught a glimpse of them preparing the day before, and had bombed their base
and sunk a few barges before they started they journey.

Not surprisingly the locals were terrified and most fled into the hills. Those who remained were recruited to carry armaments and heavy loads through the jungle paths. Since many locals had been educated by Australian missionaries, and were so thankful for the education, health care and for the peace they had brought to their villages, they supported the allied side where they could.

Tanks in the Jungle.

Not only had the Japanese landed with troops, but they also managed to land three tanks. These turned out to be more of a problem than an asset because they got stuck in the mud at every creek crossing between the landing place and the town and seemed to have played little part in the invasion.

The Japanese army immediately began to push towards the village of Alotou with the objective of taking over the airfield the allies had built on the other side of the town. They reasoned, if they took that airfield, they would have a significant advantage because the allies would have considerable difficulty resupplying their troops in the rest of PNG – especially on the Kokoda track and the headquarters in Wewac. Initially, the Japanese met with their usual success. They reached the airfield after three days of fighting on 28 August.  In the early hours of 31 August they charged the defences manned by the 25th and 61st Australian Battalions and the United States 43rd Engineer Regiment and 709th Anti Aircraft Battery. The Japanese suffered badly, largely due to machine gun and artillery fire. By dawn they had withdrawn.  As daylight broke the

Australian pursued the Japanese troops. Despite the skilled and determined rear guard action that was characteristic of the Japanese at this stage of the war, and the Japanese high command advocating a reinforcement of the force at Milne Bay, its commander, realised his troops had increasing illness and exhaustion and so recommended an immediate withdrawal.

The Gurney airfield, named after an Australian squadron leader killed in. PNG in early 1942, had been constructed in just twenty two days in July that year. The Australian and American troops removed around 23,000 coconut trees but because the runways were constructed in a heavy rainfall area that always seemed to have mud everywhere, it had to be reinforced with a 24 metre wide metal strip for its 1.5Km length.

There were three runways constructed and we stood on what was left of runway three. It’s no longer a runway and the jungle has taken back whole sections of it. In the centre of the old runway is a memorial stone to mark the spot where, after a counter attack by the allies, the Japanese were turned around on 31st August 1942 and began a retreat. By 7th September the remnant of 1381 Japanese troops including over 300 wounded men, were evacuated by their navy.

The Significance of the Victory.

This allied victory was a small one in the scheme of things, but it marked the first time the Japanese troops had been defeated on land. It was significant as well because it was the first battle where the Australian Army and Air force fought side by side and it was the first time American troops were involved in fighting in PNG. It is considered by some historians to mark the beginning of the end of Japanese dominance in the Pacific. It’s a place where today you can see the actual places where many Australian troops, went to fight for the way of life we enjoy today. And you can enjoy the local scenery and culture while you are at it.