Travel with a Purpose 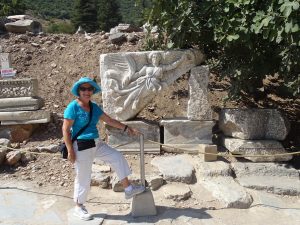 New Beginnings for an Old City

In the fourth century BC,  one of Alexander the Great’s generals, founded the new city of Ephesus on the current site. He was building near an even older city dating back to the Neolithic period. So for about 12,000 years people have lived in this city or it’s vicinity. Ephesus, which is in the modern country of Turkey, flourished after it came under the control of the Roman Republic in 129 BC. In the Roman Empire period, it was designated as the capital of the new province Asia.

This was a port city, but it was subject to continuous shifting of the shore line due to sedimentation from the river Cayster, which led to 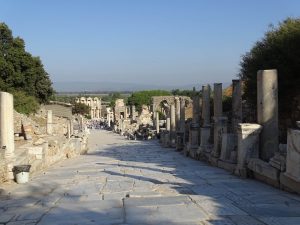 several relocations of the city and its harbours.  Lysimachus, Alexanders general, forced the people to move from the ancient settlement near the temple of Artemis to the present site two kilometres away, when he flooded the old city by blocking the sewers. This was apparently done to overcome the many deaths in the city caused by the invasion of malaria causing mosquitos from the marshes formed by the silting river. Today, this “port city” is more than 5Km away from the Mediterranean sea.

You may know Ephesus from the New Testament book of similar name (Ephesians) written by the apostle Paul. He lived in this city and started a church here in AD 52–54. We know from his description of a skirmish 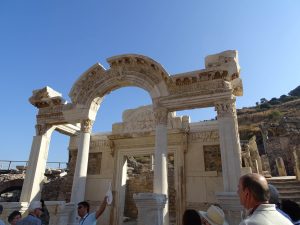 he had with silversmiths, that this city in his time, was the “city of Dianna” (in Latin) or Artemus – a Greek goddess of the moon and the hunt.  The temple of Artemis was a mixture of Classic Greek and Near-Eastern architecture. It had 127 columns that stood 20m high. Constructed largely of marble, the building, measured 115m by 55m. Little remains today of the temple of Artemis even though it was one of the ‘seven wonders of the ancient world’. It was completely destroyed in about 400 AD. 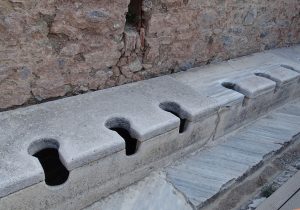 revealed splendid monuments of the Roman period along the old processional way. Thereare many sites that Paul would have encountered in his time there.  Some of the buildings are partly restored – the spectacular Library of Celsus and the Temple of Hadrian, are from the Roman period just after Paul’s time here. However the main street (Curette Street) you walk down today is the same street that he walked down and the stones you walk on are the very stones Paul would have walked on. And these public toilets may be the very toilets he used! They are really very public toilets. 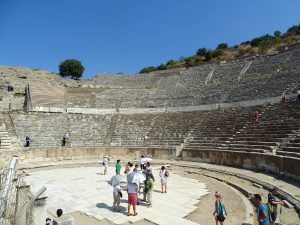 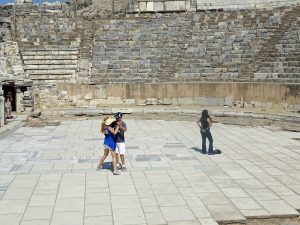 The Roman Theatre catered for an estimated 25,000 people and is believed to be the largest in the ancient world. This open-air theatre was used initially for drama, but during later Roman times gladiatorial combats were also held on its stage. 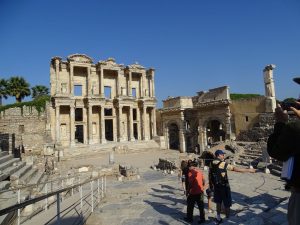 There is also archaeological evidence of a gladiator graveyard, found here in May 2007.

The population of Ephesus was thought for a long time to be around 220,000 people at its peak. However, more recently, this has been revised downward because the population density and physical size of the city boundary, leaves us with a range of 33,600 to 56,000 inhabitants. Even with these lower population estimates, Ephesus was one of the largest cities of Roman Asia Minor.

The Library of Celsus, the façade of which has been reconstructed from original pieces, was originally built around 125 AD. Celsus paid for the construction of the library with his own money and is buried in a sarcophagus beneath it. The library was mostly built by his son Gaius Julius Aquila and once held nearly 12,000 scrolls. 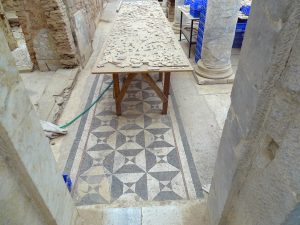 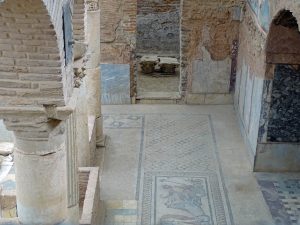 There are also a number of residences of the wealthy residents on the hills overlooking the city that have been unearthed here. They contain many spectacular mosaics and wall decorations but are obviously more like a giant jigsaw being put together by archaeologists. 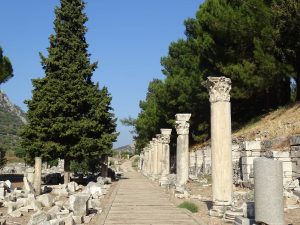 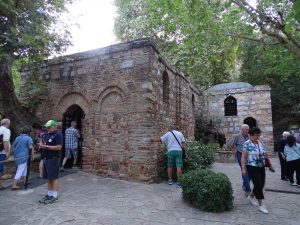 Ephesus is also the traditional site of Mary’s final residence.  This tradition was first mentioned by Epiphanius of Salamis in the 4th century AD and he said she came here with the 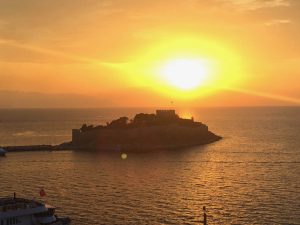 apostle John who looked after her till she died. He later said she died somewhere else! The house today that is called “the house of the virgin Mary” is an 19th century reconstruction of an ancient house design.

St. Johns basilica is about a kilometre from the ruins of Ephesus.  It was constructed by Justinian I in the 6th century and it is believed to stand over the burial site of John.

Most cruises that visit this area, offer land tours to Ephesus from the port of Kusadasi. You can also take public transport from Kusadasi. There are white mini-buses, also called dolmuses which leave for Selcuk every half hour. The trip takes about 30 minutes. From the Selcuk bus station you can take another mini-bus to the entrance of Ephesus which takes about 10 minutes.

On the other hand we took a taxi which cost considerable less than the cruise tour price. As we walked down the street at the cruise terminal, we were confronted by one of the many taxi drivers standing around, who offered to take us there.  Having photographed the driver and his car, we agreed.  He took us right to the entrance and waited two hours at the exit until we arrived back. The advantage of not taking a tour was that we could wander at our own pace through the ruins.  If we wanted to know what something was, we just had to wait till the next tour group came and listened in.  Of course the taxi driver wanted to take us to his relatives carpet warehouse on the way back but we insisted the cruise ship was about to leave and we had to hurry back.

Ephesus is certainly worth a visit – especially if you can resist buying a Turkish carpet from the many sellers in the area. Although we visited by cruise ship from Athens – about an 8 hour trip, travelling there gives you an idea of just how far the ancient people who also travelled from Athens to Ephesus actually sailed and walked!  It’s a very long way – and even longer if you do, as Paul records he did at one time, “walk by the inland route” – that’s about 1500Km. To get to look at places you have only heard about before, and to actually see things the ancient people saw is something very worthwhile and gives you insights you can’t get any other way.