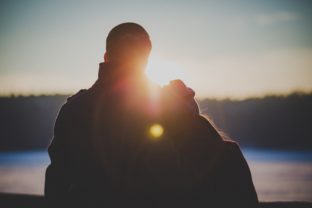 Five years ago, I said farewell to my office and colleagues to begin a journey of caring, full time, for my wife. It will come as no surprise that a career as a full-time carer wasn’t in my 10-year plan. Well, in fact, I’ve never had 10-year plans, or five-year plans, or any long-term plans. Oh, I’ve tried, but God always seems to take me on a different road. There have been some big changes in our lives.

When we started this full-time care thing, Julie and I had Julie’s sister living with us. Now Kylie has never been a problem at all. Even though she is a disability pensioner she has always been able to look after herself. But I was available to help with any issues she had. As Julie’s dementia got worse, there was going to be a point where it would be better for Kylie to be somewhere else. That sounds terrible. I didn’t want to get rid of Kylie! I was concerned about what was best for Kylie in the long term.

God provided an answer that I would not possibly have seen. Kylie met a guy. A nice guy. In some ways it was two lonely souls that found each other. Kylie moved in with Peter. Despite all the scenarios I worried about, their relationship seems to be going okay.

This meant Julie and I had to downsize. Again, God’s provision was obvious. I won’t go into the whole story, but through a unique set of circumstances, which were totally out of my control, we ended up renting a duplex in a gated complex. After Julie moved into a Nursing Home two years ago, I was forced to move out of the duplex but that ended up a good thing as my current place is only five minutes from Julie.

The Changes in Us.

Julie changed a lot in the first three years. She could longer be left alone. She lost memory of friends and sometimes family (even me), yet, as we would walk around the shops, she thought she knew everyone. She also believed her long dead parents live across the road.

Then Julie started wandering. Three times the police had to find her. Maybe she likes men in uniform! Once she went missing from my daughter’s place. My grandsons were upset that they didn’t see Grandma come home in the police car.

The OCD part of me struggled with caring for Julie. Julie fiddled with everything. She moved stuff all over the place: she would take the bedding off the bed and puts it on the spare bed; won’t put used toilet paper in the toilet (puts it in some interesting places); turns up her nose at food I prepare her (but McDonald’s hotcakes are always fine); and so the list goes on.

After three years I could no longer care for Julie at home. Two years ago, Julie moved into a Nursing Home. Within six months she was non-verbal and unable to walk. Now she spends her time in that space between asleep and awake.

I go and feed her most nights. It is a way to maintain a connection. Although there are nights where I sit for a while in the car before going home to an empty unit.

Thankfully the National Disability Insurance Scheme (an Australian government disability support system) is working well for us. While Julie was home with me, the NDIS funded carers to visit and also allow me some respite. Julie’s nursing home costs are also fully covered.

Julie Coller, my wife, really no longer exists. The person who looks like her in her room, isn’t the woman I married. There is no intimacy. There is no conversation and often no acknowledgement that I am there.

Why is this happening to me? Well, I can answer that theologically – trials develop perseverance so that the man of God is mature and complete, not lacking anything. (James 1:2-4)

But in the realities of life, that doesn’t seem too satisfactory. Yes, I know it could be heaps worse but that is of little comfort. Yet God is present in the dark valleys. I just have to hang on till I find Him.