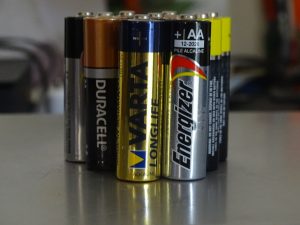 Which One Should I buy?

I was visiting my local hardware store the other day to get some AA batteries. I noticed several brands of alkaline batteries and lots of different prices. As usual, I stood there and asked myself – “Which should I buy?” There are cheap ones at $1.95 for 4 batteries. Then there are medium priced ones in a 4 pack for $2.50. And then there were the brand name ones – Duracell and Energiser. They cost $6.98 and $3.84 respectively. I tried to find any pack with the actual battery capacity written on them but, unfortunately, unless you buy rechargeable ones there is no information on the pack as to how long they will last  – that is, of course, if you discount the marketing words “Longer Lasting”, “Maximum Performance” and “Longlife”.

Without any information, I thought I’d ask the staff for help. The only thing they could tell me was that Varta batteries were the best selling ones. So I thought I should test some of them myself and next time I would know which ones to buy. I purchased four different brands of non-rechargeable, Alkaline AA cells. They all had long expiry dates so they should be fresh enough.

The next problem I had was the question of how to test them. I have had a Nickel Cadmium battery charger for a few years and because of the memory effect in those batteries, it has a built in discharge cycle which take 300mA from the cells until they reach their discharge voltage. That’s a medium load for alkaline batteries but Wikipedia does warn that the life of these batteries will vary depending on the current drawn – so the larger the current drawn, the shorter the life. But since I was testing the same type of batteries, using the same load, I figured I could do a comparison at least. It seemed so easy to do but it took quite a while since one test takes around 6 hours!

The first batteries I tested were the Varta batteries. Most batteries come in variable size packaging to make it difficult for you to work out the price per battery. Some come in 4 packs, one in 5 packs and another in 6 battery packs. Varata ones come in a 4 pack at a cost of $2.50 or 62.5c each.

I put two into my charger, set it to discharge mode and waited. Of course I got sick of waiting and did other things so when I came back, not only had the discharge cycle completed but the charger had also gone into the charge mode and finished that cycle as well. These batteries are not supposed be recharged according to the warning label on the back of the pack so I wasn’t surprised to find they were fairly hot sitting in the charger. Unfortunately, I didn’t have a clue how long they had been discharging for, so I took out another two, put them into the discharge cycle but this time used my video camera in time lapse mode to record the charger cycle when I wasn’t there.  The camera records one frame every two minutes so I could count the frames and multiply by two to get the time.

Just to prove a point, I also tested the first set of batteries that had been recharged. They lasted 60% of the time of the new Varta batteries. Since the charger is a NiCad charger, and NiCad batteries have a lower fully charged voltage, I can’t tell if the charger had turned off before they were fully charged or they simply had less capacity on recharge. Either way, it was impressive that I could gain so much more simply by charging them. Of course the warnings about not recharging them on the pack still stands so I’m not recommending that practice.

The next to be tested were the Duracell coppertop batteries – they cost $6.98 per pack of 5 just to make a price comparison more difficult – they are also available in a 30 pack as well for about ½ the cost per battery compared to the 5 piece pack. They did last longer than the Varta ones (see below) but at the cost per battery of $1.36, I expected better results. The charger also went into the charge mode for these batteries too when I wasn’t looking so I had to test the recharged versions as well. They came in at 3½ hours – again about 60% of their fresh capacity.

The Energiser batteries are the in-between price batteries – they come in a 6 pack which cost $3.84 so they were actually 64c each. However I’m not sure whether I was lucky, or whether my local hardware store just got it wrong, but another big stationary store has these same batteries at $7.99 in a 4 pack which would make them 1.99 each. They are called “Energiser Max” if you want to check them out somewhere. They did much better than I expected. I thought they would last longer than the cheap ones but less than the Varta ones but I was wrong. There was only 2 minutes between the Duracell and the Energisers. So the last two minutes of Duracell power cost 62c – $1.36 – $0.64. I was watching when these reached their charge voltage and so I stopped the charger as they began to charge.

The final ones I tested were the Arlec ones. These were the cheapest so I expected reasonable poor results. They cost $1.95 for 4 batteries or 48c each. They lasted 6 hours and 15 minutes. That means the best performing ones – the Duracell batteries – lasted only 15 minutes longer. Thats a very small increase in capacity for three times the price!

So the ones I will buy next time will be the cheapest ones. Of course I have quite a collection of batteries left over so it might be a while before I need any more! There was insufficient difference between the cheap ones and the brand name ones to make me think they are any better or worse than any of them. So save money and buy the cheapest.

Heres how each of the brands performed..