Be a Real Man 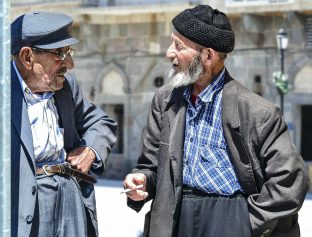 Since early in my life, the world has told me to be “a real man”. By that they meant – don’t cry, hold your feelings inside and basically get over whatever is happening to you in your life. But as I get older and look back, I wonder if all that advice was helpful. I’m sure that some of the parenting I received was not top class, but there are times when, what I was taught about being a man, certainly was helpful. There have been many times when I had to push past the feelings I was having at the time  and simply do it anyway! For example, if you are caught in a house fire you need someone who is decisive, can see a way out and someone not put off by the fear inside them. You need a real man.

Now throughout my life, I have had various men with whom I interacted. Some were easier to put up with than others! There were many blokes where I worked, and we discussed lots of things over the years. Sometimes there were conversations about work or relationships or even philosophy. And on some occasions, they were very competitive “discussions” and each bloke wanted to win. But I can’t recall ever telling someone, I wasn’t doing well or anybody ever having the courage to tell me they weren’t OK. The only time that’s happened, is when I joined a mens retreat group. I joined the group unsure of what I was letting myself into, but I did so out of duty – the boss required it of me.

The first day of the retreat was an eye opener. Each bloke was required to tell their life’s story and the rest of us were required to listen. That’s breaking two rules of the real men box I was living in. As each story unfolded, so did the emotions. One bloke had a rough start to life. Another was undergoing significant opposition in his work environment. Others were having family issues to cope with. Every story had some connection with the way they were feeling at the time. The second rule was, I wasn’t allowed to fix anybodies problem. I had to just sit there and listen and wait till they finished.  Even then fixing was not on the agenda. There was the occasional clarifying question, but mostly it was about listening to the other blokes.

That group has such a profound effect & I enjoyed the company of those blokes for six years until I was in a position to form my own group, within my work situation. It taught me particularly, the power of listening to other blokes. This is something we could all do with learning more about. So I’ll write another blog sometime about the listening skills I learned in the retreat group and as a counsellor.

Then, when I retired, everything changed. My work group was not available to me anymore. No one seemed interested in my view of the world and now my wife generally sets the social agenda. I go along and mostly enjoy what we do and who we meet. And I believe that’s a fairly common situation for retired blokes.

The form of masculinity I was taught as a kid, still means I want to look like I’m self sufficient in the eyes of other people and I don’t want others to know I’m not coping. And in truth, I have only one or two bloke I would call a friend and who I would call if I was in trouble. Being male means being tough is the only way! No hugs, no tears. No fear. You have to be as tough as nails to be an Aussie blokes.

Of course things are different today for the younger generation.  I’m really concerned for my grandson and the world he faces. I think we have a confusing world for young men growing up today. I only hope that the current flag waving feminism that has taken over the public discussion in Australia, will eventually recognise that it’s not all gain to be like men and that not all their talk about “toxic masculinity” is the truth for most men. The fact that the suicide rates for men is three times higher than women, makes it fairly obvious that being male in Australia, is not all a bed of roses.

Men’s fashion styles change too. Beards are common in younger men now. Tattoos have come into favour and maybe they’re going out of favour because they’re permanent – beards aren’t so. These things are often seen by the wearers as a commonly accepted sign of masculinity. Then there are forces pushing men to be “metro sexual” men, or “hipsters” or “lumbar sexual men”, or even “retro sexual men”. But really these are mostly descriptions of fashion (or uniforms of masculinity?) which probably doesn’t effect you as a retired bloke in any way! But we had our own pressure too. We survived the platform shoes, the purple shirts and safari suits of the 70’s.

Rules for a Man Hug.

I saw a thing on TV the other day where they experimented with mens hugs. They concluded the rules are; an A frame hug with no contact below the chest was the only way to go. Long hugs are out. There are no kisses and pats are part of the hug process as long as they are less than five pats at any one time.

Now I think these surface rules can effect the quality of relationships amongst men and originate in the idea that we don’t want to be labelled “pansies” or worse. I’m not advocating we start kissing but I think there is a longing in most men for connectedness with other blokes. The good news is – in retirement, you have the greatest opportunity of your life to make some good friends.  But it’s not going to happen sitting watching daytime TV.

Maybe we could form our own blokes group with a few mates, and go away for a weekend, do some fishing, and talking. Of course you will have to have a competition of some sort between the blokes (something that doesn’t take too much skill). You’ll probably also need a trophy of some sort.

If that sounds difficult to organise, then get to your local men’s shed. My local men’s shed is involved in making wooden toys, cutting boards and wooden things to sell or send overseas to needy people. So, not only do you get to spend time with other men, you can get to do something worthwhile. The bloke who was showing me around the other day, said he’s seen the transformation that can happen in the shed. He told me the story of one bloke who had lost his wife and spent his days just staring out the window. But, when he was coaxed into joining the mens shed, his whole world changed within a day!  Friends that can happen to you. All you need is to get the courage together with other blokes to make it happen.