In  central Queensland, about 570 km northwest of Brisbane, is an often overlooked national park called Blackdown Tablelands National Park. We visited the area on the recommendation of a miner we met in a local motel after our last visit to Carnarvon gorge and were so glad we took his advice.  Like Carnarvon, we encountered mountainous terrain and unique landscapes with gorges, waterfalls and lots of different vegetation. There are also a few spots where you can see the rock art of the Ghungalu people.

To get there, you take a turnoff around 10 Km west of Dingo, which is about half an hours drive from Blackwater on the Capricorn highway between Rockhampton and Emerald. Then follow the road across the plain for about 15 kilometres until you reach the side of the plateau.  The 23km gravel road within the park, begins at the base of the tableland. It isn’t suitable for caravans and can be slippery in wet weather. The first 8km of the road is steep and winding. 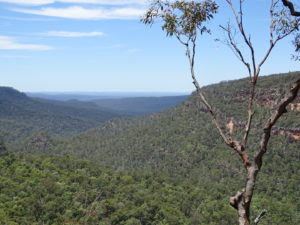 At the top of the range, the first place you come to is the breathtaking Horseshoe Lookout. It has picnic tables, barbecues and toilets. There’s a walking trail to Two Mile Creek (1.8km) starting here.

The tableland itself is a 900m sandstone plateau rising abruptly from the plains below. There are many creeks in this national park some of which have cut deep gorges and today tumble over the cliffs as waterfalls along  their courses.

This is a bush walkers paradise. The car parks allow you easy access the many walking tracks in the park. These enable you to discover different plant communities which seem to thrive in the cooler, elevated climate. Of course there are lookouts with terrific views of the plains below or the gorges and a few ancient art galleries.

About 2 kilometres walk from the car park is the spectacular Rainbow Falls (Gudda Gumoo) with more than a 40m drop into the pools below. In the right light you will see why it’s called “Rainbow Falls”.

The creeks flow will depend on the season. Not surprisingly, some of the creeks, which are fed by rain, quickly dry up in this country. Some, however, are spring fed and always flow, even if it’s just a small amount.

The tablelands are positioned at the junction of the Shotover, Expedition and Dawson Ranges. Geologists tell us there is evidence of folding, shown in the rises and depressions amongst these ranges as they collided in ancient times.

The plateau has a more moderate climate than the surrounding plains. There are many micro climate areas supported by the forests, with ferns at ground level. Some of the plants are unique to this area. 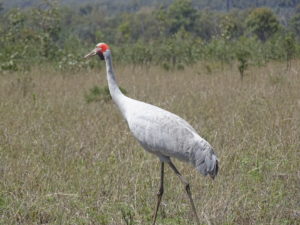 In the eastern section of the tablelands, the average rainfall is around 1,500 mm per year. Sometimes cloud cover will descend on the plateau and occasionally dense fog shrouds the plateau.

If you plan to visit for more than one day, camping is available on Mimosa Creek, and at Munall campground. You will need to pay for a permit to stay there. Picnic facilities are available at Yaddamen Dhina lookout. It may be a long drive to get there but it is well worth it.