For years we’d heard about this tropical city surrounded by red cliffs overlooking the deep blue sea and the beautiful colours everywhere you looked. So when we found a cruise that left Perth and headed north, we signed up. 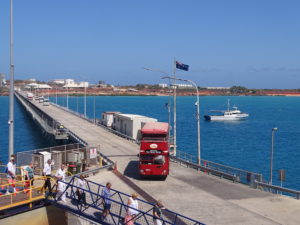 Arriving in Broome in the early morning, the first sight we saw was the long jetty, leading to where the ship was tied up. As we weren’t allowed to walk on the jetty, the cruise ship provided busses to pick us up and take us into town – about 9Km away. The cruise ship had booked every bus in town and a few busses from nearby towns as well, so at school drop off and pick up times, the busses were fewer in number.

Even from the bus on the way in, we could see impressive green vegetation and red cliffs sandwiched between the blue of the sky and deeper blue of the sea. But this spectacular site was just the beginning!

The town of Broome is supposed to be a typical Australian outback town. But it’s bigger than I thought it would be, with a population of about 14,000 year round – and that can treble in tourist season. Because it survives on tourists, there are many pearl shops, a pearling museum, an old picture theatre with no roof (they obviously don’t have much rain here) and the usual grocery shops along with tourist shops full of T shirts and souvenirs.

Along the main street is a plaque to the four bombing raids on the town in World War Two. Although Broome was a small pearling port at the time, it was also a refuelling point for aircraft. As a result, Broome was on a line of flight for refugees, after the Japanese invasion of Java, and had become a significant Allied military base. The worst attack occurred on 3rd March 1942 killing at least 88 people. Japanese Zeros began attacks at around 9:20am by shooting up the flying boat anchorage in Roebuck Bay and the Royal Australian Air Force base at the Broome Airfield. That raid lasted about an hour. The Japanese fighters destroyed at least 22 Allied aircraft.

Broome has two main tourist beaches – Town Beach and Cable Beach. Town Beach opens to the eastern side of the peninsular onto Roebuck Bay. There is a long shelf of rock that juts out into the bay that seems to be only partly covered by shallow water at low tide. This shelf is why there is such a long jetty there for large ships!

Town beach is, surprise, surprise – easily accessible from the town itself. It is also the site of the famous ‘Staircase to the Moon’, where at low tide, a rising moon shines on the mud to create a ladder like image in the mud at low tide which leads to the moon at the top. On ‘Staircase to the Moon’ nights, a food and craft market is operated on Town Beach. Unfortunately we were two days too early so you will have to Google it to see what its like!

Around 7Km from the town is the very popular Cable beach a 22 km long stretch of white sand facing to the west and the Indian Ocean. Low cliffs of red ochre rise behind the very flat and very wide beach. This is the beach, where in 1889, a undersea telegraph cable was laid connecting to Singapore and England.

If you are looking for some excitement in Cable beach, Camel rides operate from this beach. 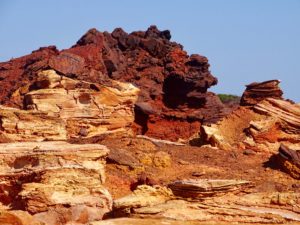 Gantheaume Point is located at the southern end of Cable beach. The Gantheaume Point lighthouse is a good place for observing dolphins, nesting sea eagles and migrating whales during their seasons. Around 30m out to sea but visible at low tide, are dinosaur footprints from approximately 130 million years ago. Because the tracks can be seen only during very low tide, cement copies have been placed on the headland.

The scenery here is stunning. The beautiful blue water, red ochre rocks and soil and the occasional green bush combine to create a magic of their own.

At sunset,  Cable beach is a great place to watch the day fade into darkness. There will only be standing room along the beachfront to take photographs when the cruise ships are in port but its worth it.

Here is a video slide show of a few of the photos we took in 2016. I made this on my iPad and will write another blog sometime on how exactly you can do the same on your next trip so you can use the time in the aircraft on the way home to build something to impress the family. The music was a bit short so I had to play it 3 times!!