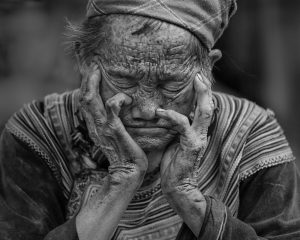 It Will Happen to You.

There are many things in life that disappoint us so, disappointment is a very common experience.  We buy things & they are a disappointment. Maybe you got a birthday gift & the parcel looked great before you unwrapped it. Then when you open it up – it’s … “some new underpants again”

But by far, the greatest disappointments of all are people. They can cause us more problems than poor birthday gifts. When it happens we feel terribly let down. Especially with..

So what can you do when you face disappointment? The truth is, if you are going to go anywhere in life, you need to face up to disappointments because they come to everybody who deals with other people.

Now there is a story in the bible of a man named Moses. You may have seen his movie – “The 10 Commandments” or the follow up “The Price of Egypt”. Moses lead a whole lot of people on a journey to a new life and, whether you think the story actually happened in history or not, the story is worth a look because Moses shows us how to deal with disappointment.

You see the people he was leading complained about where they were going, some complained about not having enough to eat, others complained about water.  They challenged Moses leadership, they doubted his decisions, & criticised & questioned his motives.  At one point they just said, “Moses, you just brought us out here in the desert to die.”

In Exodus 15: 22 it says “Then Moses led Israel from the Red Sea and they went into the desert of Shur. For three days they traveled into the desert without finding water. When they came to Marah they could not drink its water because it was bitter, that is why the place is called Marah.”

“Marah” means bitter so this was a very difficult situation. Only three days earlier they saw a victory at the Red Sea. I’m sure you remember the nasty Egyptians in chariots coming after the Israelites who were on foot crossing between two great walls of water. Then when the Egyptians were about half way across and the final Israelites were leaving the pathway, the walls of water collapsed and the Egyptians drowned. At least it was that way in the movie!

Now that was a huge victory. They were on a high – It was a spiritual mountaintop. So In the first part of chapter 15 they are singing a song…

“God has delivered us.  What a great day!  We’re unbeatable!  We’re invincible!”

Just three days later, they seem to have changed their tune! Now they’re grumbling. So we need to understand…. Great Success is often followed by failure.

The fact is, after every mountaintop there is always a valley. So if you are on a high at the moment – get ready. There may be disappointment coming your way. So enjoy the high while you have it.

When you are in the midst of the disappointment, you must find a way to think differently about your situation. That means finding a more positive point of view.  Some people find if they actually write their disappointment down, it helps them think through it. If you see the whole picture, it can make a difference. In this process you need to try to separate your emotions from exactly what has happened.

The next thing to do is to begin looking for a solution. You are where you are, so the question is not how you got there, but how are you going to move on.  Any time you hear yourself say to yourself, “This is a disaster” or “If I hadn’t done this” or “I’m (or they are) a terrible person”, use these thoughts to trigger a shift in your self talk to something more positive. “It’s not the end of the world – everyone feels like this sometimes” or  “I need to find a way to go on.”

The final thing to do is to make a plan on dealing with your situation.  I don’t mean planning to run away and join the circus or going to live in Fiji. I mean a plan that tomorrow.  “I’m will do something small that I know I can achieve.” Curiously, achieving something – even if its small, can lift your mood. It may not change the situation you are in but it can help you feel you can make progress if you put your mind to it.

Now just seven verses later the bible says the Israelites left Marah. v. 27 “Then they came to Elim where there were twelve springs and seventy palm trees and they camped near the water.”

This was a place of absolute delight. They had more than enough water and when you read the chapter, you’ll find they spent over a month there. So the greatest shortages in life are often followed by unexpected periods of abundance – if you keep going.

Curiously if you were to get out a map, and look at the Sinai desert, you’d discover Elim is 7km from Marah. It was just down the road!  But they stopped at Marah  & complained and were stuck being negative & worrying and criticising Moses when in a few hours they could have been at Elim where they had more than enough.

Maybe you feel like you’re living at Marah.  It’s bitter & distasteful & it stinks. Maybe you needs aren’t being met. So what are you going to do about it?

Don’t Just Sit There –  Do Something.

Just get on and do something. Moses didn’t hold on to it. Instead, Moses cried unto the Lord. So give it to God.  The Bible Says “Cast all your cares on Him, for He cares for you.” So maybe thats where you can start. Try crying out to God and keeping moving until you find the solution and maybe your Elim. It may be closer than you think.