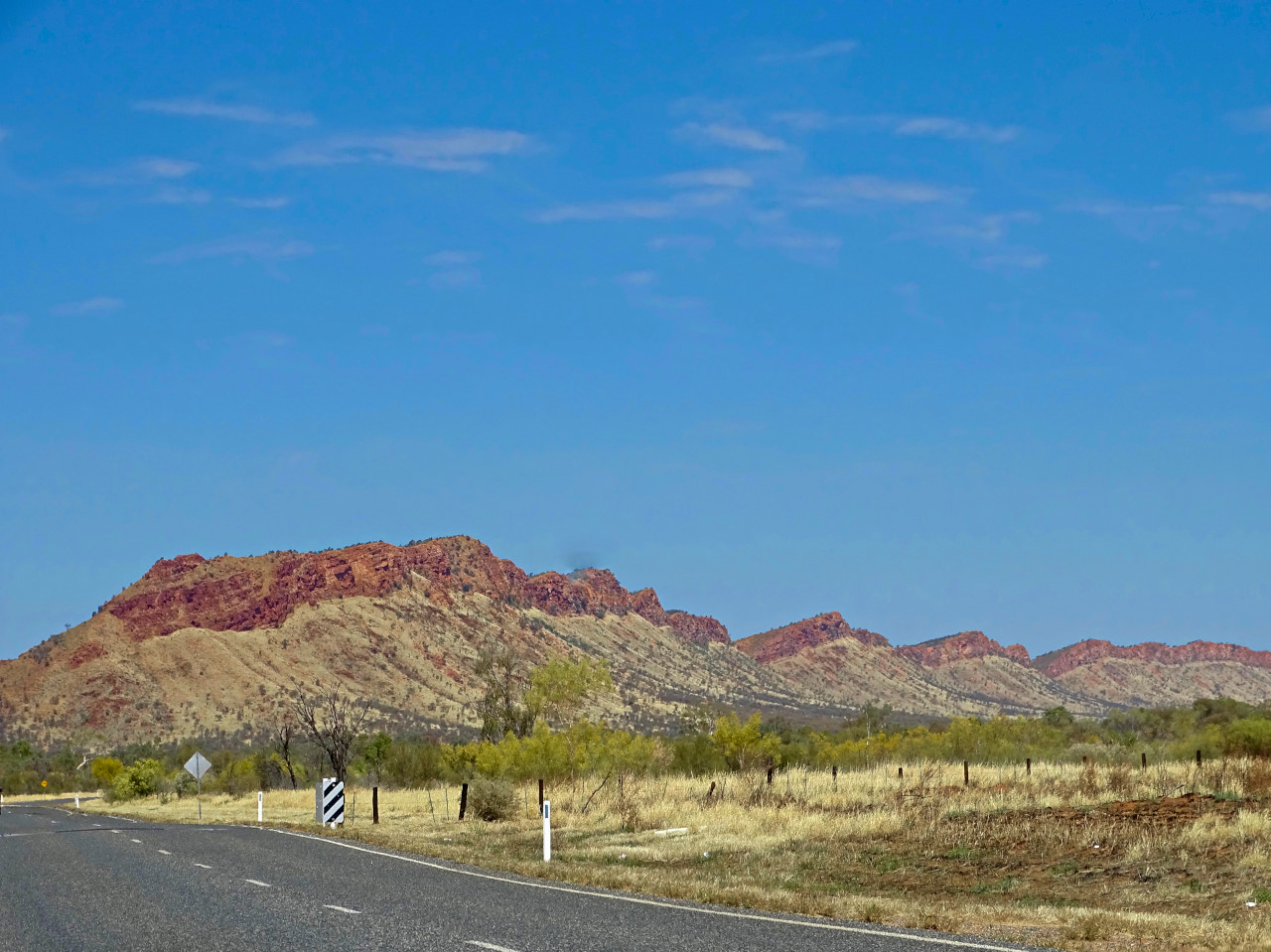 Travelling to the West MacDonnells

If you are ever in Alice Springs in central Australia, make sure you hire a car and drive west alongside the West MacDonnell Ranges and visit Angkerle. Hiring a car is fairly painless except for the fact they offer you only 100Km/day in the basic hire fee. In that part of the world 100Km is very close. Everything is a long way away and anything worth seeing is at least 50Km from Alice Springs. So add to your expected fees a bit more for kilometres driven because it’s very easy to use more kilometres than you planned. I was told by someone in the hotel car park that I should hire a camper van because they come with unlimited kilometres but used a little more fuel.  But it was a bit late for me since I was getting out of my hire car at the time!

For the first 40 kilometres out of Alice, you follow a range of hills – part of the MacDonnell ranges as you travel west on Larapinta Drive.  The scenery is typical of the outback in this region with hills opening onto scattered grasslands – with grass if there has been enough rain.

After about 38Km there is a right hand turn to Standley Chasm which is a further 12Km drive – all on sealed roads.  So it easy enough to get to in a normal vehicle and the carpark is sealed.  Just don’t trust Apple Maps to take you there. It wants to take you to a place in Alice Springs called “Standley Chasm Kiosk”.

The real Standley Chasm is located in a private flora and fauna reserve owned by the Iwupataka Land Trust.  There are also picnic areas, barbecues and toilets there. It is called “Angkerle” by the Aboriginal owners, but the chasm’s European name honours Mrs Ida Standley who in 1914, was the first school teacher in Alice Springs.

Arriving at the Kiosk we paid the entry fee of $12 for seniors to walk the next 2Km to the chasm. It’s worth sitting in the kiosk and having a coffee and scone first – it is reasonably priced and you can buy meals here as well since you will probably visit at lunch time.

Walking along the track that links the kiosk to the Chasm, you are following a creek where  pools of water attract a great variety of  birds. The paths are well kept, and along the way, you will see some ghost gums with their distinct white trunks and you will pass some very ancient cycad palms. The MacDonnell Ranges cycad is a species unique to central Australia and is the only cycad in the region. Cycads have been in this area for at least 1 or 2 million years, though the ones along the path are not that old. Some could be a thousand years old, but I never figured out how to ask a cycad its age!

About half way along the path there is another path branching off into the bush which takes you to the lookout at the top of the hill. It’s quite a steep climb so we gave it a miss.

Arriving at the entrance of the chasm is an awe inspiring sight. The walls of around 80m from top to bottom, will glow at midday in the sunlight. You may have to stand and wait for the sun to cross to the other wall but its worth spending the time watching the progress of the sun as it slowly makes its way from one wall to the other.

If you have time, there is a second chasm to visit which is another 20minutes walk further on. To access it you need to  walk through the first chasm and turn left on the track at the end that heads off into the bush.

Where did it come from?

Geologists tell us that the chasm was eroded from the sandstone in times past by the creek – a tributary of the Finke river when it was very wet in this area. Creationists also say it was eroded by water but their timescale is a bit shorter! Either way it is well worth a visit and there is another very picturesque chasm a bit further on that was also eroded by water and it is even more spectacular! Stay tuned – I’ll write about soon. 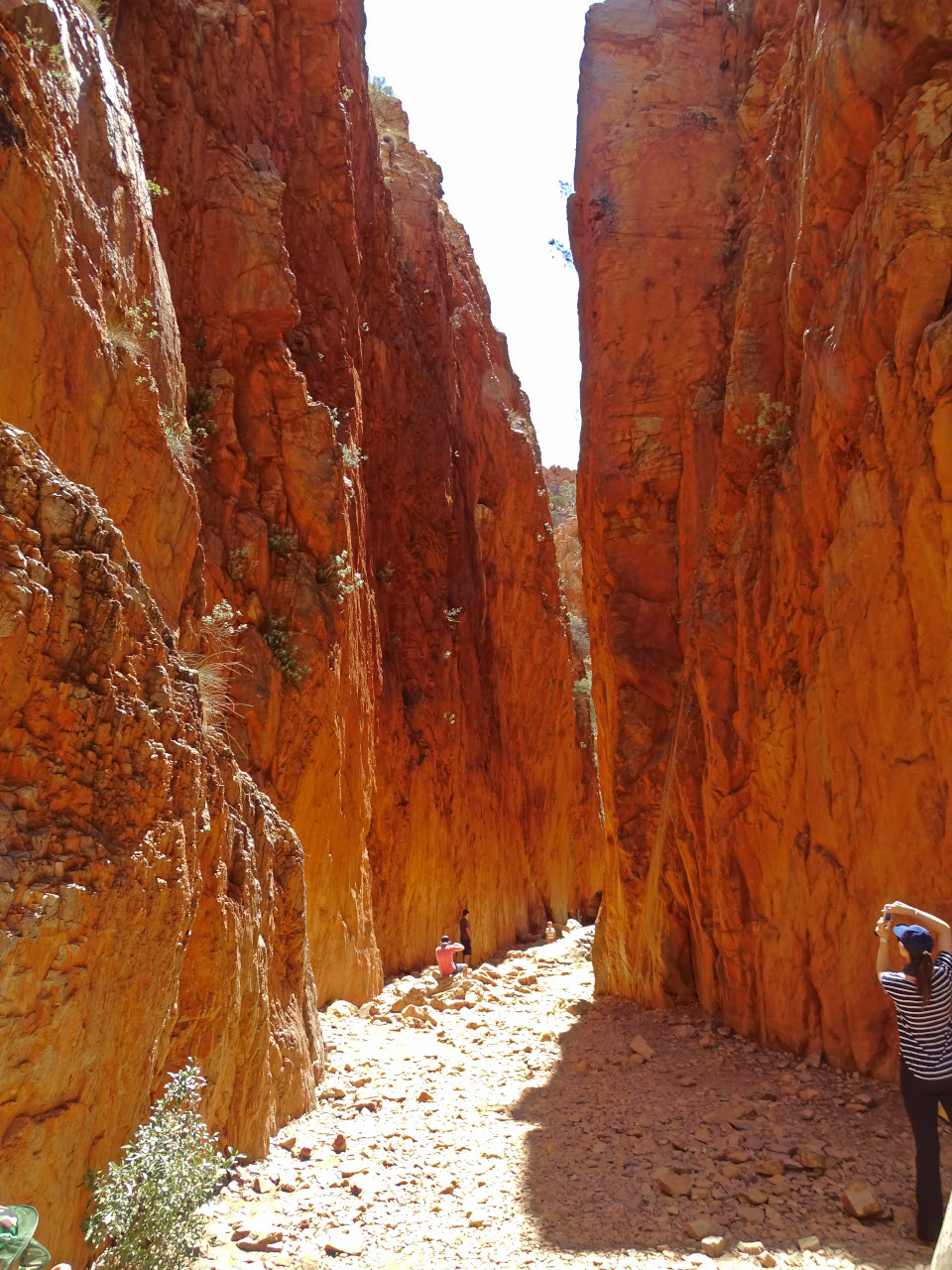