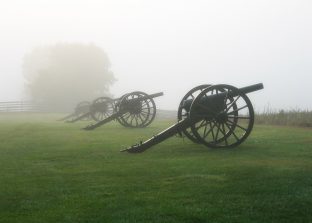 Many years ago I worked for a broadcast network as a technician. One thing we did often, was to fix the studio loud speakers. You see back there, they had the latest and greatest technology in speaker systems. These very expensive speakers had cones (the bit that moves to make the sound) made from foam plastic. Unfortunately the cones were heavier than the old fashioned cardboard ones (in the cheaper speakers) or perhaps the suspension that held them in place was weaker than the old fashioned ones. But whatever caused it, over time the cones drifted towards the bottom of the speaker cabinet and eventually gave off a scratching noise as well as the music when they were being used.  So we had to regularly pull the speaker boxes apart and turn the speaker over so it would drift the other way in the next few months.

Whenever we did that, we had to test the speakers but we only had one record to test them with. It was the London Symphony Orchestras’ version of Tchaikovsky 1812 overture. I was never a fan of classical music but had to test the speakers every time.  I must have played that record 200 times and usually at high volume. Over time that piece of music it got stuck inside my head. Along with Capriccio Italien, and Marche slave, two other tracks on that same record they have stayed with me for 30 or maybe even 40 years. I think there was also some music from the Swan Lake Ballet by Tchaikovsky too. So if you ask me now what my favourite classical music tracks are – those are probably the first (only) ones I could name.

So recently, I purchased an album with those tracks on it – because I was feeling nostalgic one day. This time it’s from the Israel Philharmonic Orchestra and I have to say, the music is still stunning! The cannon sounds are not quite as I remember them. Maybe the British one used real cannons and these ones are replicated but they are still good. But if I close my eyes during the 1812 overture I can see the smoke drifting across the battle field then the horses charging and the troops fighting in waves to and fro – just like in the movie Brave Heart. Maybe, if I really think about it, I can see Russel Crowe riding along in front of the troops calling out that they have a choice between freedom and captivity. I can’t make out whether he’s speaking Russian or French though. So the battle’s taking place right in front of me. When it comes to the cannons, towards the end, I try and have the music right up there as loud as possible so I can feel the cannons shaking the house. Of course the house never really shakes but all sorts of things are possible in my imagination!

I have never bothered to work out what the overture was all about until I decided to write this article. So I searched Wikipedia the source of all things. It says, Tchaikovsky wrote it in just six weeks in 1882 as a special memorial piece. Seems to me this guy was a genius! It commemorates the successful Russian defence of Moscow against Napoleons invading army in 1812.

It begins with a tune from a Russian hymn which is supposed to represent the Russian people praying for a quick end to the battle. Mixed into the melody, is the French National Anthem (La Marseillaise) and Russian folk tunes. These tunes “battle” with each other for prominence as each side advances against the other. There is a couple of times towards the end when cannons are fired and add to the scene of the battle going on before you.

Curiously according to Wikipedia “The 1812 Overture is popularly known in the United States as a symbol of the United States Independence Day, a tradition that dates to a 1974 choice made by Arthur Fiedler for a performance of July 4 of the Boston Pops.” Thats a bit strange since the US and Russia are not always good friends!

Get it Free and Listen.

If you still don’t know the music I’m writing about, search for the free Skidmore College Orchestra version of 1812 Overture. I guess they couldn’t afford to use cannons in their performance but it is free and has the added sounds of someone coughing strategically in two quiet sections of music.

So why not get connected to YouTube or iTunes or somehow get the music and play it. It’s only 15 minutes long and if you don’t enjoy it, you haven’t lost too much of your life!

You can find one version here. complete with a picture of Tchaikovsky I assume. The cannons are a bit pathetic and the church bells are a bit over the top. So maybe there are better versions you can find. Whichever version you get though, you must play it loudly. It will be a good test of your ears if it’s loud enough, and will test your speakers too. By the way, if your speakers sound scratchy turn the speaker box upside down for a few days and try again. You never know it might just fix them.