Future Technology from the Past

Before the travel restrictions hit, we travelled to Florida in the US. Our trip was mainly because the Disney World complex is there and we had grandchildren to enjoy the sights and scenes of Disneys’ fun centre. Thankfully we travelled there in January – the off season if there is one because it was really crowded.

We thought we were staying in a Disney hotel near the Disney fun parks. To our surprise we stayed in a Disney resort – which has 2,880 rooms in ten separate buildings, three pool areas, and one central building, that houses the front desk, gift shop, arcade, and food court. It is just one of two “value priced” resorts. In addition to the cheaper resorts there are around 20 other resorts as well – 11 of those have over 1000 rooms. Each of these resorts is decorated around a theme. Ours was popular arts. So there was a huge skateboard and walkman and records all arranged around the buildings.

How Big is This Place? 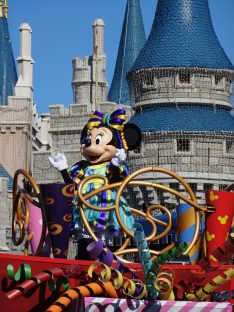 It was mind blowing to realise just how many rooms Disney provide to tourists! The resort complex has four theme fun parks – Magic Kingdom, Epcot (an Expo like theme park), Disney’s Hollywood Studios, and Disney’s Animal Kingdom. In addition there are two water parks,and all of those parks are supported by 27 themed resort hotels, nine non-Disney hotels, several golf courses, a camping resort, and other entertainment venues, including the outdoor shopping centre Disney Springs. I think you could spend three or four months there (if you can afford it) and never visit the same spot twice! Disney own over 100 SqKm in this area but have only developed around ½ of it. This is tourism on steroids.

While we were there, Disney had their annual marathon so to avoid the crowds we took that day to visit the Kennedy Space Centre which is not too far away. The bus left around 7am and travelled for about an hour to get there. We took a tour which included the tickets even though we could have taken just the bus to get there and back and saved a few dollars. But by doing it this way, we saved time in the ticket lines. When there are so many tourists in the region, the lines can be very long! And you will run out of time to see things at the Space centre. There are just so many things on display.

Leaving the Orlando city area, most of the journey was along highways. The further we went, the more rural the landscape became. As we got closer we passed some marsh lands complete with an alligator or two along the banks of the creeks.

The Kennedy Space centre is one of ten National Aeronautics and Space Administration centres in the USA. Since December 1968, it has been NASA’s main launch centre for spaceflight involving humans. Launch operations for the Apollo, Skylab and Space Shuttle programs were carried out from Kennedy Space Centre Complex. It is adjacent to Cape Canaveral Air Force Station. Space X also uses these facilities for many of their launches. Although you never get to see modern day control centres, you can see the historic control centres (or mockups) and space craft from different eras of space exploration.

At one stage we stood and watched a video of the Atlantas space shuttle which ended with an almost imperceptible curtain being drawn back to show the real thing in front of you. The Atlantas is one of four shuttles that were built and it began its operational life in 1988. A fifth shuttle (Endeavour) was later built to replace the Challenger shuttle which blew up. Atlantas flew 33 missions in her life and landed for the last time at the Kennedy Space centre in July 2011. This marked the end of the space shuttle program.

But there are not just shuttles on display. There are space craft from all the eras of space exploration since the first space flight by NASA in 1958. If ever you wanted to see a Gemini or Apollo rocket or a moon lander vehicle they are right there.

There is also a hall of memories where the unsuccessful launches are remembered. This included the launch of the Challenger space shuttle which blew up 73 seconds after the launch on its 10th flight and the Columbia shuttle that burned up on it’s return.

It’s the Size That Gets You

The thing that struck me was the size of these rockets and equipment. I’m not sure what I expected but in the flesh they certainly tower over you and make you feel very small. In addition the power of the motors used to launch these vehicles was awesome. Maybe the plan was to make you feel small – it certainly worked for me!