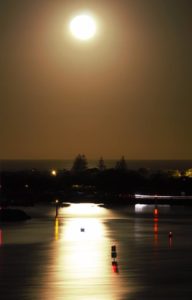 Moon rise over the broad-water at Labrador Gold Coast

You Need A Holiday.

A Gold Coast holiday is something we could all do with – especially since it’s nearly holiday season in Australia (of course if you are retired – its always holiday time!) But where do you go to get all the experience and not spend too much money?  You could go to the flashy parts like Surfers Paradise and pay a fortune, but a better option is on the quieter end of the coast  – Labrador, just a few kilometres north, which can be just as relaxing and a whole lot easier to find a car park. If you look carefully, you can find accommodation costs at much lower rates for similar quality rooms and you are even closer to the theme parks to the north.

Labrador was part of traditional country for aboriginal families from the past, due to the abundance of fish, oysters, mudcrabs and water birds in the area. The two local languages most spoken of by these early settlers were the Yugambeh and Kombumerri languages.

The first photos show the moon rise over the Broadwater. Looking east from one of the high rise buildings you can see these quiet waters right in front of you, and off in the distance, the Pacific Ocean. In between the two is the area known as the spit – with its extensive areas of natural vegetation separating a few picnic areas. A little further to the left is the seawall where boats access the ocean and the reefs out to sea. Even further to the left is South Stradbroke Island. 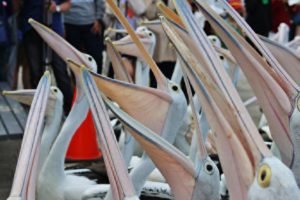 You can catch a boat to the island and go fishing or surfing there if you want to get away from the crowds. Some blokes paddle their surfboards across the 250m of waterway that separates the mainland and the island but you have to be careful as you have to cross some busy boating lanes to get there.

Pelican feeding happens at 1:30pm each day at 371 Marine Parade, Labrador QLD 4215. There is a fish shop located there and they feed all the leftovers to the birds every day. You never know what you’ll see. Here you see not only pelicans, but also tourist trying to get the best picture and often getting in the way of the birds. Watching the tourists jump as the birds react always brings a smile!

In different weather, the scene changes. As a storm approaches from the ocean, sometimes water spouts form in the clouds. These are a somewhat 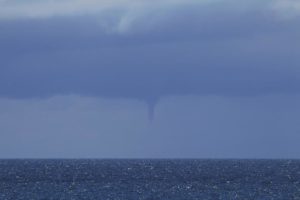 rare but there are sunrises and sunsets every day that are usually worth a photo or two.

The Broadwater parklands is just a short walk from accommodation in Labrador. In fact you can walk for miles along the Broadwater both north and south. The Gold Coast City Council endorses the Labrador Heritage Walk, and produces a guide booklet available here which includes twenty one places of historical interest. Three mapped walks between 1.7Km and 4.2Km are covered and have been designed to pass the main interest points.

If you are into history, the library in Southport, has many photos from the past and there are several historical buildings of interest in the local area.

Pelicans and Cormorants on an Island in the broad-water, Labrador.

If eating is more your style, you can eat in the many restaurants of the area. There a many budget priced restaurants in the Aqua building on Marine Parade and you get to sit and watch the boats and water craft as you enjoy your meal. If you prefer, there are a few offering a better class of dishes but you won’t be disappointed in any of the restaurants or cafes.   Probably the best value meal, is the budget breakfast from the Beach Cafe in the Aqua building. Last time I was there I had bacon, 2 eggs and toast for just $4.50.

Looking south from the spit, the high rise buildings of Southport can easily be seen. In between there is the sand pumping jetty – it’s a 500m long jetty that extends out into the ocean. So most of the time, there is access to some decent fishing from the jetty.  The jetty is used to pump sand across the open waterway between the seawalls.  The Southport Bar was incredibly dangerous until  the Gold Coast Seaway was opened. It was estimated that 500,000 cubic metres of sand moved along the south-east Queensland coast each year in a northerly direction. So a sand bypass system was needed to bypass the seawall since its construction in 1986. The pumps pick up the sand from the jetty and deposit it near the southern tip of Stradbroke Island.

So maybe it’s time for you to plan a Gold Coast holiday and enjoy the scenery, the fishing and the eateries for yourself. You could choose some top notch place and party all night but, I’m too old for that and so I choose the quieter end of the Gold Coast.