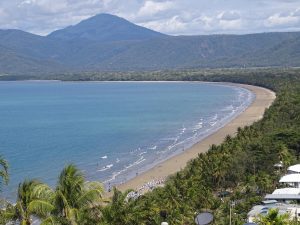 About an hours drive north from Cairns, through some fantastic coastal scenery, is the sleepy little town of Mossman. With a population of about 1700 people, it may have little to commend it as a hot spot for visitors, but the town has survived the ups and downs of the economy since the late 1800’s. Sugar cane is the key industry in the local area, with the Mossman Central Mill, the only sugar mill in the district, crushing the cane before sending it off to other places. Mossman has a few heritage listed buildings such as the Mossman District Hospital, the Shire Hall and Council Chambers, the Anglican Church and the National Bank building. But most people come to Mossman to see other things.

Just outside the town, about 5km away, in the Daintree National Park, is a magnificent gorge on the Mossman river. This gorge has been water carved over the centuries and today has steep sided cliffs running from the mountain ranges to the coastal lowlands. Through this gorge, crystal-clear water flow among granite boulders of all sizes which have been washed down from the hills during times of heavy flood. This is the traditional home of the Eastern Kuku Yalanji people who have lived in this area for thousands of years.

Arriving at the car park, there is plenty of parking, and you’ll find a visitors centre and coffee shop right ahead. As you enter the visitors centre, there is a warning notice that tells you about the condition of the river at the swimming spot. Much of the Mossman Gorge part of Daintree National Park consists of largely inaccessible and steep slopes of the Main Coast Range. These steep mountain ranges trap moisture blown in from the ocean which ensures frequent rainfall, maintaining the rainforest and ultimately feeding the Mossman and Daintree rivers. Because the river then is fed by streams from a significant distance,  rainfall in the tributaries or further upstream can cause dangerous flows of water rushing through narrow sections of the gorge. 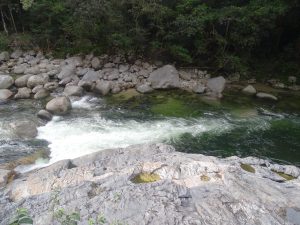 Sometimes these will occur unexpectedly, because you are standing in bright sunshine and the rain has occurred several kilometres away.

The river in this photo, was running very fast and there was a warning sign at the kiosk to not swim. there. Though it looks calm on the surface, it’s easy to imagine people being swept away. There have been several deaths in the swimming hole caused by the water washing people into the many boulders in the river.

From the visitors centre, there is a walk of around 2Km each way to the swimming hole but an electric bus operates about every 15 minutes from 8am to 6pm to takes you right to the beginning 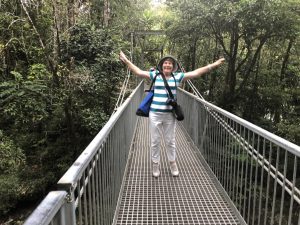 of the elevated walkway through the lower canopy of the rainforest. This walkway is wheel chair accessible and is reasonably flat for most of the distance to the suspension bridge. There are also toilets near where the bus drops you off. The walk to the suspension bridge takes around 10 minutes. There is a longer path of around 2.4Km which takes you further into the forest but it requires more time and is not as well formed. 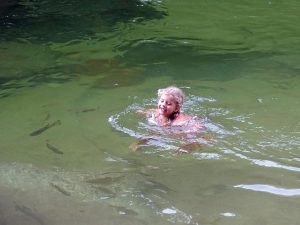 The swimming hole looks like a great place to swim on a good day but it was a bit cold the day we were there and so we left the swimming to others.  Jungle perch which can be easily identified by two conspicuous black spots on their tail, seemed to be plentiful and at home swimming around the people in the pool.

So when you have a chance, visit Cairns and the Great Barrier Reef and then take a day to drive to Mossman and visit the gorge. If you are a Queensland resident and a pensioner, you can get to Cairns by train from Brisbane for just $25. Because it takes about 24 hours (it’s a long way!), you’ll need to take some food or buy it on the train but it reasonably priced. You can find a place to stay in Cairns on Airbnb for $60 or $70 per night and backpackers hostels are even cheaper.  So it can be a reasonably cheap holiday.  You will need to hire a car to go north for the day but again that can be for as little as $50 for a day.