For a few years now, the press in Australia has talked about some issues as a “barbecue stopper.” What I think that means is, when you are hosting a BBQ with your friends and family, and someone brings up any current political topic, everyone has an opinion about some issue because everyone cares about that particular topic. So all the other conversations stop right there and then. 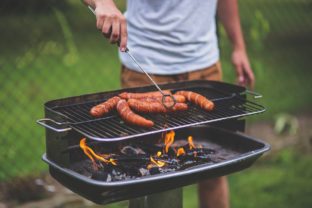 Now that may be true about a very few things in politics but it is not true about most thing! Mostly politics is about the everyday mundane things. Whether the federal government will (should/can) change the price of electricity charged by State based organisations (they can’t!) Whether we should allow someone to own newspapers and television stations in the same city. Whether they will fund the latest road development somewhere. Or the hot topic the last few years – are there enough women in politics?

While some issues in politics are interesting enough, there are few that would stop all other talk and engage everybody in the room or back yard as the case might be. However, I have found a way to stop conversations in nearly every situation I’ve been in.

A few years ago someone organised a reunion of all the ABC trainees who started work together in Brisbane in 1966. There were 10 of us who started and nine turned up to the reunion. Early in the evening, people were talking about their life after the ABC. Only two present that day were still working there. I clearly remember standing in a circle deliberately saying nothing. Then Greg noticed I hadn’t said anything and turned to me and asked “What are you doing now?” I turned towards him and said “I’m a pastor” then watched as he, and others squirmed uncomfortably. He said “that’s nice” and that was the end of that conversation!

I’ve had that same conversation on many other occasions and the result was the same. It always stopped the conversation. Usually they said something simple – like “I’m sorry for my language before” as if I haven’t heard all the swear words in the dictionary), then hastily changed the subject. They didn’t know what to say next.

Recently, when I joined my local mens shed, I was required to say what my last employment was. So, at the membership interview I was basically told I should keep my religious views quiet. I wondered if they told carpenters to keep their ideas to themselves or electricians to stay clear of giving opinions on electrical work in the shed? I’m not saying this to complain about my treatment. I am delighted to be a part of the Men’s shed movement and would recommend it to every retired bloke, and I am happy to comply with the rules. But I’m saying this to illustrate the point. Orthodox religious views are conversation stoppers and people who work in such organisations, especially so.

I also need to add, this has been true even before the child sex abuse allegations in church run organisations grabbed the headlines – though those failings of many priests probably hasn’t helped the situation. As far as I know, no complaints have been aired about my denomination but I suspect we are all tarred with the same brush.

A Yearning for the Sacred.

There is a book called the  “Third Calling”, written by an American woman and her husband. In it Leona Bergstrom who say “Baby boomers have a yearning for the Sacred”. I’m not sure if she means American baby boomers, or if it includes Australian ones too. But I think she has a point. Many people I know have a yearning for something bigger than themselves. They may not call it “sacred” but many have a deep desire to find something that will give them purpose and meaning. So many people are simply feeling lost and unhappy with their current life situation. I believe this situation comes to the fore in retirement, when we no longer have the distraction of work to keep our mind off this issue. It seems to me, these people are looking for something they have never found. And that search becomes so desperate, they turn to the bottle or something else to ease the pain of feeling lost!

Is that true of you too? Are you looking for something significant that will give you meaning and hope in this desperate world? Well I want to tell you there is hope. There is a way forward.

Why are people afraid?

I think many people are afraid of orthodox religion because they see a life that’s full of restrictions. They want to be free and keep their options open. But as I was in church yesterday, listening to a great sermon by my young pastor,  it occurred to me that things like the ten commandments are not expressions of restraint at all. Despite their language, they are expressions about how to make your life work well. I mean “thou should not murder” sounds like good advice to me if you want to live a free life. “Thou should not steal” – same deal. “Honour your father and mother,” again it’s good advice about keeping relationships working well. But what about “don’t commit adultery?” It may be a bit restrictive at times, but it can save you a whole lot of heartache later. Keep one day per week sacred, not coveting another wife or their things, all of these commandments are good advice if you want to live a great life. Breaking any of them will almost certainly lead you to a worse life and difficult circumstances.

So, in my opinion, the only sure way to change your life for the better, is to get in touch with the God who made you. He decided you were worth making in the first place. You parents may not have planned you but God did. And he has a plan for your life. He has set out some things for you to achieve in your life time. All you need to do is to find what they are, and make a start on achieving them. If you want to know where to begin, buy a copy of Rick Warrens book “The Purpose Driven Life” and start right there. It’s $20 worth spending.