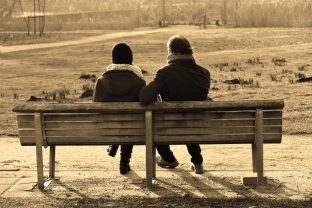 One of the biggest problem in any relationships is the different approaches people have to life.  John Gray wrote a whole book called “Men are from Mars – Women are from Venus” on the subject of our differences.  So occasionally, we have issues of how we do things. Sometimes when we retire, some of us try to tell our spouse about a better way to drive to the shops or clean the floor or cook or basically do anything! Often these conversations don’t turn out the way we thought they would. But, it’s not just women and men who have very different approaches to life. Everybody’s different and so you should expect a little misunderstanding in discussions from time to time.

So what should we do about all this? What is the key to making relationships work better than they have before?  I believe the major key to having better relationships, is our ability to listen to each other. Of course, no one ever teaches kids about listening. We kind of pick it up along the way. Sometimes, we have good skills modelled to us as a child. Often not. So many of us pick up patterns of behaviour that are not helpful and you don’t always hear the other person well.

Now if you are like me, while my wife or anybody else is talking to me, I’m planning in my mind, my next contribution to the conversation. And it’s good to be prepared! However, the problem is, we only hear a part of what they are saying. Sometimes we miss the entire point and get stuck on something they say early on. So, what if I told you there is a better way and it is really simple?

The Problem With All Conversations.

When I was studying for my business degree, I took a course in communication. They pointed out that in any conversation, there are three things involved. There’s a sender, a receiver and a message and there can be errors introduced into each step. For example, the sender may stumble on a word or two, the listener may not be able to hear what was said, and the message may be distorted by some outside noise. So, there are a number of places that the communication may be interfered with. So the communication may not be understood or worse may be completely misunderstood, If you are the listener, there’s not much you can do about the two of those things, but you certainly can improve things for yourself, if you use “active” listening.

Active Listening is The Key.

In active listening you get involved with the conversation by ensuring you have received what was sent by the other person. That means you repeat back to them what you heard. So if they say “The rain in Spain is heavy in the plain” you say back “You think the rain is a bit heavy in the Spanish plain?”  You don’t have to creatively change what was said, and in fact, on most occasions, you can simply say back exactly what they said, and as long as you do it as a question, it reduces the likelihood they will think you’re mocking them. I believe active listening is the key to ensuring any conversation is the best it can be.

I have used this technique often – especially when I think, the other person is fairly emotional, or they thinks what they are saying is important. It’s also very helpful in a noisy environment. Of course, reading it on paper makes it look a bit staged, but no one has ever commented on me doing this in any conversation I’ve had. Even when I’ve been trying to teach them this technique I’ve had to tell them what I’m doing!  The only response I have ever got in a conversation, is a nod of the head or them saying “yes”.  But this technique gives me the advantage of ensuring I have heard what they have said. Sometimes, I’ve got it wrong and they have corrected me but again, it means they understand they have been heard. This step alone, helps take the heat out of a discussion and can lead to a better outcome.

As you get better at this technique, you learn to repeat back the emotional content rather than the words they say. So if they say “The rain in Spain has been going on for weeks!!”. You could say “It sounds like you are a bit frustrated with the constant rain”. This take a bit of practice if you are a bloke, because hearing the emotion in a conversation and then putting a name on it, is not a skill that comes built into the male brain. And this area is the one area where I have found a number of people have had to correct me when I’ve named the wrong emotion – but they still haven’t noticed what I’m doing! This step is not vital for most conversations and even if you never get to this level, simply to let them know that they have been heard, will put you into a category of friendship most of us only hope for.

So Make It Happen.

So, next time you have a conversation with someone special, try this technique out. It may open the way for you to get back the thrill you once had in each others company.  But, even if it doesn’t,  it will improve your level of understanding and communication with each other. So don’t just sit there!  Go and give it a try – you never know where it will lead you.