If you have ever wanted to be a movie maker, then this is where you should start! This is the first article and mostly about the gear you need and setting it up. I’ll try and give some clear directions on using iMove in the next article, because it’s on every Mac they sell these days. If you don’t have a Mac, then you need to find other software and there are plenty of options out there with many similarities.

The first step is to get a script. This is very important because the movie must tell a story or say something important if it is to be interesting to anybody else. You could write one if you have a good idea, but, if you are a beginner,  make a script from one of the stories on this website. You just copy and paste them into a word processor.  If you managed to follow these instructions and make a video using our script, send it to me, and I’ll see if I can put it up on our YouTube channel. It need some new videos since I haven’t made anything for our retired blokes channel for a couple of years now.  So any help I can get is appreciated.

The second step, of course, is to get a video camera. You could use a phone or iPad for this but it can’t zoom and maintain the picture quality. That’s OK if you are sitting there talking but if you want to show some action pictures, you need a zoom. Some still cameras can make movies too, but you need to be able to zoom.  Some can and some can’t zoom when taking movies.  I use a High Definition camera, it results in a large file, but it is worth it. I use a Panasonic HC-VXF1 which is a super high definition camera but when using it for YouTube, standard high definition (called 1080)  is good enough. Don’t worry if that final part doesn’t make any sense to you. Any high definition camera will do.

Get a Tripod or Some Books.

Next you will need a tripod. I have had a few tripods over the years. The best one has a fluid head (the bit the camera sits on) which makes it smoother to move the camera when its recording. However, since you will probably be sitting there and talking to the camera, it really doesn’t matter about pan or tilt. Even a table will work if you can use some books and get the camera at the right height. It should be about the same height as your eyes otherwise, your chin will look too large or your bald head will be the star!

The next thing you need is a microphone to pick up the sound. This requires some attention to get good results. The one built into the camera won’t sound very good and will capture all the echos of the room you are in. You probably don’t notice the echos when you are talking to someone, but the microphone will pick them up and they will make the sound messy. If the bloke next door starts mowing his lawn or the refrigerator starts up, you get that sound as well. The only way you can overcome (or minimise) that issue, is to have the  microphone very near you – that way your sound will be louder than the echos or the mower and it can still sound great.

For most videos, I think the biggest issue is the sound. Certainly, if you use one of my scripts, that will be the case, because all of the important content, is carried in the sound track. The pictures of me don’t carry too much useful information! So you must get the sound right, before everything else. I use a headset microphone but you can also use a lapel microphone that clips on your shirt to shorten the distance between your mouth and the pickup point. 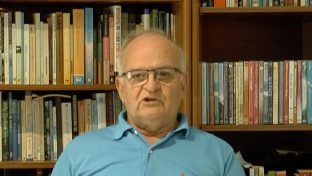 Since in your first video, you will  probably be just sitting and talking, a wired microphone will work. However, I’ve also used a radio mic which means I don’t have to worry about the wires showing up in the image or getting tangled when I move from the camera to the seat. You probably can’t see the microphone in this video frame because it’s under my shirt. It’s a headset microphone but it’s so big and black I decided to hide it.

Get a Teleprompter App

The next step is to get out your iPad and download a Teleprompter app.  A Teleprompter is a device used by TV stations to hold and show the scripts for their announcers. Their Teleprompters use a half mirror in front of the camera lens, so when the announcers are reading their script in the mirror, they are looking directly at the camera. Most of us won’t have a half mirror, so you have to do without it. You can buy a simple one on Amazon for about $100.  A Teleprompter app will scroll through the script at the speed you read at and if you set it correctly, you will have the right words at the right moment. You may have some control over the script font size as well if you need that, though I use the default font size in both of the apps I use. I use Teleprompter Pro Light. It’s free and works very well.  If you want to have your iPad record the video, you are better off with the App called Teleprompter Premium for $A20. It enables you to record video on the iPad while it displays the words for you to read.  There are other apps that do the same, but this one has the text across the whole screen not just the top or side so you can use larger text and see more of the words that are coming up. If you do want to use only the iPad for recording, you must take some effort to ensure good sound. You can buy iOS microphones on eBay and that’s probably where I’d start though you may be able to use the headphones that came with an iPhone because it has an inbuilt mic but the cables a bit short.

You will need to edit the script to shorten the lines because, unless you have speed reading training, you can never read a whole line in one glance. So you set the script up to suit how many words you can read at a time with only one glance. That way your eyes are not darting back and forth across the screen. I can read about 4 words at a time, so I like each line to hold only that number of words. So as an example, for this couple of lines of text…

So where do you start? I wrote about one way to start a few weeks ago in another blog. It was rather generalised but I think, well worth a read, but it requires you to do some research on each others personality and styles.

I edit it, to look like this (without the dots)…

Please ignore the dots – this web editor puts them in and I don’t know how to remove them!  Each line only contains one thought, and, as the sentence continues, the next part is indented. When each sentence ends there’s a full stop and the next sentence starts on the left edge so you can see the end, and drop your inflection accordingly.  It takes a while to edit a whole script but its worth it to make reading easier!

The last Teleprompter app I chose to download is called “AutoPrompt.”  It seems to be better than the Teleprompter Pro Light app I used before, because, if you stop speaking, it stops scrolling and when you start again, it starts. I haven’t used it yet, but if you can find it, it may offer you some advantage.

Get the Right Background.

Next find a background where there is some interest, but its not too distracting when you sit in front of it. The one above is a bit too “busy”, so next time I’ll choose something a little more plain. It does has the advantage that it implies that I have a big library and therefore I’m an expert!

Set up the camera to frame your body accordingly. You can choose a close up shot or medium shot or anything that takes your fancy! Your eyes should always be about ⅓ of the way down from the top. Many beginners set their eyes at ½ way but that just looks wrong.

You need to choose a place where the lighting is even. If you are sitting outside, there may be bright things in the picture that will cause the camera to turn the brightness down and so you will be too dark. If you want to use lighting indoors, then a front light at an angle, can help. But so you can still read the script, the light needs to be higher than your eyes and off to the right or left. They have to be placed so you don’t have too much nose shadow on your face. You can use a another light of lesser brightness or photo reflectors to fill the shadows but this is getting a bit tricky. You also should use a back light – they should be high up above you to light up your hair (if you still have some). That will give a bright fringe around your head to separate you from the background. If you get some photographic reflectors (less than $20 on eBay) and fiddle with them you can often get good results but it takes some fiddling to get the light just right.

The camera should be on a tripod, as far back from where you’re sitting that is still comfortable, but zoomed into frame the picture correctly.  If you have a lot of light, you may need to use some makeup to reduce the shine off your forehead or if you have more hair than mine, you might just be lucky!

My setup has the iPad on a seperate stand as close as possible to the camera lens. If the camera is far enough back, the difference between your eye focusing on the script and you looking directly at the lens will be minimal and you will minimise the eye movement in the picture without a half mirror. But, you still have to read the script, so make sure the distance suits your ability to read the iPad.

If you get this far, you can start the camera, record yourself talking to the camera and make a reasonable video. You can stop and restart anywhere and cut out problem parts using iMovie (more about that another time). If you do cut out a piece with a mistake in it, you will find when the edit is finished, there will probably be a jump in your head position because you have moved slightly. So, if you stop somewhere, change camera angle or zoom in a bit, before you start again to disguise the fact you have made a mistake and are restarting. You can zoom in a little using iMovie to achieve the same effect.

That, my friends, is how I start, so, why not get all the gear together, and experiment and see how you go. Make a recording or two this week then come back next time, to find out about editing your movie using iMovie. We’ll look at adding some music to the sound track, doing voice overs,  using Chroma Keys and using still images.  See you next time.