More grand than the Grand Canyon?

For years I’ve heard about the Grand Canyon in Arizona. Those who have been there have told me “you must go sometime”. My daughter and Son in law have visited there a couple of times and they spoke about the magnificent cliffs and great sunsets they saw just near the visitors centre.

So, on a visit to the USA early this year, we decided it was our turn. But before we went, we asked an American friend about where he would go on such a trip.  Without hesitation, he said if you go to the Grand Canyon, you must visit Bryce Canyon as well. So with his advice in mind we began our planning. It was easy to get to Las Vegas and from there there is a whole variety of tours to take or cars to hire to get you there. We visited the southern rim because it was the only place open in January. 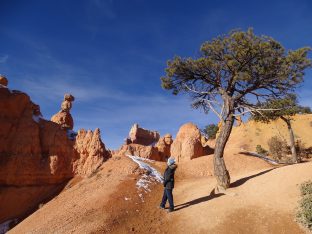 The Grand Canyon was certainly worth a visit. It is about 450Km from Las Vegas so an overnight stay is needed for more than a few moments to take a picture at the tourist stops.

The canyon is mind blowing in its dimensions. It is over 400km long and  stand on the edge of a giant cliff and look across to the other side – a distance of approximately 16km and then down to the Colorado river 1.6km below you, certainly takes your breath away.

it is not a canyon at all. Rather it is a series of giant natural amphitheatres along the eastern side of the Paunsaugunt Plateau in South Western Utah. At an elevation of around 3000m is is a fair bit cooler than the Grand Canyon as well.

Bryce Canyon national park at around 145 sq. Km is smaller than the Grand Canyon national park which covers an area of 6,734 sq. Km. Bryce also receives fewer visitors each year with The Grand Canyon catering for 6 million people each year and  Bryce Canyon around 4 million.  I imagine in the summer, it would still be very busy, but since we were there in winter, there were only a few people in any of the lookouts we stopped at, and no one else in some.

We first parked in the car park near a place called Sunrise point and followed the track forward to the safety fence. Here, we were met by a fantastic view of the first bowl shaped amphitheatre section of the canyon. Within the amphitheatre are hundreds of pillars of sandstone called hoodoos or tent rocks.

These pillars of rock have formed over time by rain filling the cracks in the rocks then freezing. As it froze, it expanded and pushed outwards forcing the crack to open up. Over many years, these water and ice cycles, meant the outer rocks broke away leaving just the central column standing. Hoodoos range in size from the height of an about 1m to heights exceeding a 30m.  Their shapes are irregular as the alternating hard and softer rock layers erode at different rates. This causes many to have weird shapes. There are some that look like people, some like animals and a lot like tall towers.

Differing minerals within the rocks often give the hoodoos different colours throughout their height.

The Colours of Winter.

In the winter, under a bright blue sky, the pillars were surrounded by areas of brilliant white ice which gave emphasis to the deep pink sandstone rocks all around. The top layer of yellow sandstone and the occasional green tree complete the colour palette.

You probably won’t be surprised to learn we took over 180 photographs in the two days we were there. Some of them are amongst the most spectacular photos we have ever taken. 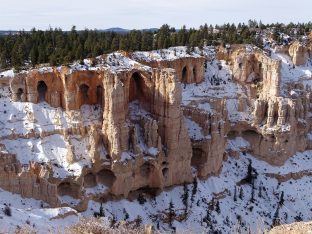 So Plan to Go There.

So all in all it was a very impressive part of the world to visit and I would recommend driving the extra distance just to see it. Of course along the   way there are other places to visit – like Horseshoe bend, the scenic Zion national park, the Hoover dam,  and the brilliant Antelope canyon. I’ll write more about these places in a future blog.

You will need a few days to get to and from these places and a few overnight stays if you are going to get the most out of your trip but I’m sure you will be glad you made the effort and took the time.