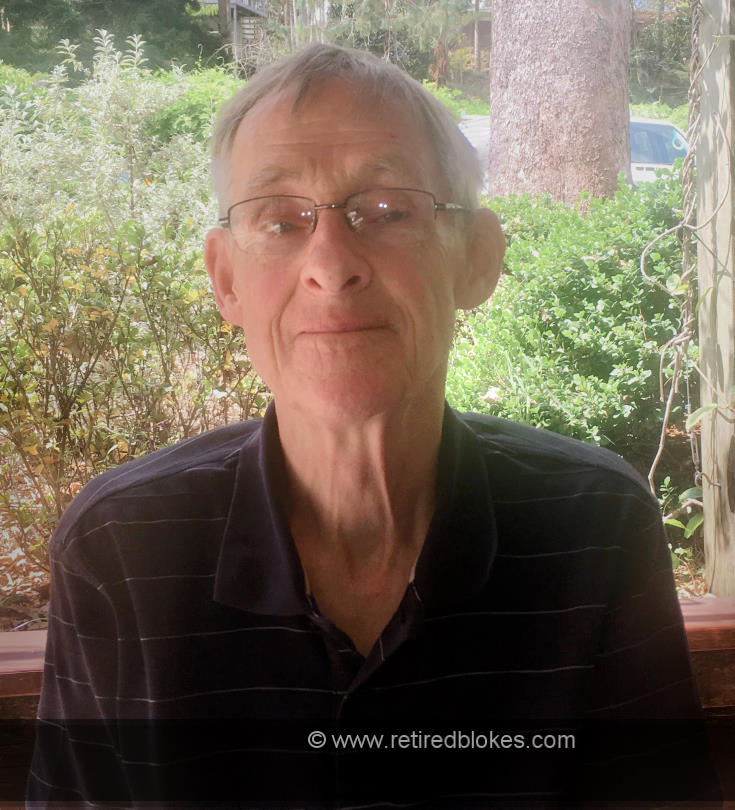 I was born in England and came as a “£10 Pom” to Australia in 1970. After World War II (up to 1982) Australia attracted people from the UK to come as immigrants by charging them a fare of just £10.

When I lost my job with the Australian Government in 1989 I returned to Britain where I finished my working career. I then returned to Australia to retire some years ago as my wife is Australian-born. Being retired from a busy life in engineering and IT, I wanted to use my time creatively.

I am a Christian and attend a local Anglican church regularly, where I sometimes teach Sunday School; I also lead a Bible study group that meets in a home.

My first volunteering job was with the Logos Hope ship when it was in dry dock in Split, Croatia and did some work in 2007 on refitting the ship. I was involved in things such as painting, removing rust, installing an outside staircase and of course cleaning. The volunteers there were from all over the world. There were people from South Africa, England, Australia, USA, Canada, the Faroe Islands and Germany living in the same building. We lived together and walked to the ship each day. I made good friends in the time I was there.

The Logos Hope is now the only OM ship currently in service; OM is a Christian mission that stands for Operation Mobilisation. OM Ships International is the organisation behind Logos Hope. The Ship Ministry began in 1970 as part of the global Christian training and outreach movement, OM International. Since then OM’s ships have visited 480 different ports in 151 countries and territories and welcomed over 46 million visitors on board. The goal is to bring knowledge, help and hope to the people of the world. We do this by supplying vital literature resources, encouraging cross-cultural understanding, training young people for more effective life and service, providing needed relief, and sharing a message of hope in God wherever there is opportunity.

In 2009, I discovered Habitat for Humanity – the group who builds houses for disadvantaged people all over the world. It works in partnership with communities across the Asia Pacific region (including Australia) to address housing poverty and to support integrated community development. Their international program is designed to address multi-dimensional aspects of poverty, recognising that adequate housing can be the foundation needed to lift families out of poverty. The goal of Habitat for Humanity is to provide everyone with a “safe and decent place to live”. My first trip with Habitat was to Fiji. It was a great time contributing to the welfare of others, which provided me with a sense of meaning in life.

A year later, I went on a trip to Indochina. This was not to build houses but rather to encourage Christian missionaries in Laos I knew who were working in very difficult circumstances. In addition I joined a Christian mission, part of Mercy Teams International, in Cambodia to install a solar plant in a school about 2 hours from the capital, Phnom Penh; the aim was to provide lighting so that the school could be used for evening classes after sunset.

I again joined Habitat for Humanity in 2011; this time a house was built in Mongolia. Then in the next few years I joined teams building houses in Sri Lanka, the Philippines and Samoa. Building houses for the poor means I’m meeting someone’s need. It has the advantage that I can work at my own pace. Each build lasted about a week or two. I also once joined a Presbyterian team that extended a presbytery in one of the islands of Vanuatu.

Caring for those in need

In 2015, I visited three field managers (Albania, Bosnia-Herzegovina and Bulgaria) of the group “Mission Without Borders” in the Balkans to encourage them and learn of their work first-hand. It is a Christian organisation serving children, families and elderly people suffering poverty and oppression. Through practical and spiritual support, it gives hope by meeting urgent needs and building self-sufficient communities. The mission does this work because it believes it has been called by God to help the poor and needy. The work is currently focussed on six Eastern European countries: Albania, Bosnia-Herzegovina, Bulgaria, Moldova, Romania and Ukraine. The mission works with thousands of children and families across the region working through local churches, volunteers and its own specialist staff.

I have also volunteered recently as an observer for the parliamentary election in East Timor, so I joined an Australian group to oversee the election; many groups monitored the election in rural areas outside the capital Dili but I stayed in Dili. This trip was organized by an academic at Deakin University in Victoria.

Giving is an important part of who I am. I travel at my own expense, stay in cheap accommodation and travel by bus whenever I can. But helping others always provides me with purpose and meaning in life. There are hundreds of volunteering jobs all over the world for anyone who wants to expand their horizons.

One hobby I have had over a number of years is woodworking which I have pursued much more in retirement at the Riverina Woodworkers. I have made 3 nests of tables for my 3 sons (there’s one more to make for my daughter), other tables, lazy Susans, bread boards, jewellery box, storage cabinet, a garden seat, two teacup stands. Most items have been gifts to family & friends, but I have recently been taking orders from other friends, e.g. two mug stands & two more lazy Susans.

Another interest is in choral singing which I first had in England. It started with a Mens choir in 1990 and I have been a member of many choirs since then; I was a member of a church choir in England for more than 10 years which met in our home. Since living in Wagga I first joined the Cantilenas, then a French choir and am now a member of another choir, Minor Details, which is currently singing Renaissance & Baroque music. There is a German proverb that runs “Keine bőse Männer singen Lieder” which means “only happy people sing” and I think that’s so true; if you are angry than you are not going to sing songs.

It’s obvious that I like travel, particularly overseas travel. My volunteering jobs are usually in the Asia / Pacific region, which means in tropical countries; my wife is not keen on the tropics, so she does not join me in these ventures. However we have travelled in much of Europe as well as in North America together. I try to travel overseas at least twice annually.

All in all I live a very full life and enjoy my retirement – and you can too. There are lots of things you can volunteer for. There are hobbies to suit every taste and skill level. If you like helping people, you could join habitat or simply travel to encourage others who are struggling. So get out today and discover how you can make your mark in retirement.