Recreational Activity for the Retired 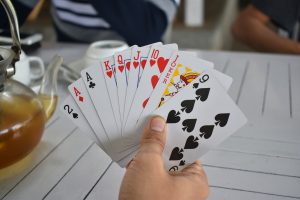 Too old to play football, or cricket, or any of those recreational activities that you once did?

Then maybe the card game Bridge is for you. Bridge is one of the most popular activities for retirees, either socially or at a bridge club. You can enjoy the company of other people, the competitive nature of the game and have fun trying to become better at the game every week.

Don’t know how to play? No problem. Just follow these simple instructions… If they are confusing (or because they are) see the last paragraph to solve this problem.

The dealer distributes 13 cards to each of four players. They deal one card at a time, face down, to each of four players beginning with the player on his left. Each player is paired with the opposite player to form a partnership. There are three phases to the game of bridge – the bidding stage, the contract stage and the play.

Once the cards are dealt, each player picks up his hand and look at the card they have been dealt. Each player need to make an assessment of how good their hand is. They begin by allocating point to the picture cards – Ace = 4, King = 3, Queen = 2 and Jack = 1. If they have 13 points, they can make a bid on how many “tricks” they think they will win if their chosen suit is “trumps”.  A trick is where each player puts one card down face up and the highest card wins that trick. A trump suit is one where even the smallest card outranks all the cards of the other suits. It is possible to call “No Trumps” and then the game would be played with each card assessed on its face value.

When a bid is made the bidder is saying “I think my I can win at least six tricks plus the bid.”  So, if the bid is Two Hearts I will have to win 8 (6 + 2) tricks to win that round.

Each bid must name a greater number of tricks than the last bid, or an equal number but in a higher suit. The suit order is – Lowest, Clubs then Diamonds, Hearts and Clubs with No Trumps being the highest of all.

So, a call of “Two No-trumps” will outbid a bid of “Two Hearts”, and a bid of “Four Clubs” is required to overcall a bid of “Three No-trump”. The call can also be “pass” which means I don’t think I can win more tricks with this hand of cards or I am happy with the last bid made.

Now there are a few other rules for bidding and you can find them on various websites.  Google will help you find them!

The final bid in the auction becomes the contract for the whole round.  If the contract has a trump suit, every card of that suit is a trump. The winners partner becomes the “dummy,” for that round. They place their cards on the table face up and the winner is required to use their card in playing each trick.

The best strategy is to win every trick! However, you also have the help of the other person you are paired with. Each partnership attempts to outbid the other pair at the table. The bidding process is also a signalling system where one person in the partnership signals to the other person the types of cards they have. That means a good couple who understand the game and the signals passed between them has a significant advantage!

A card is placed, face up, in the centre of the table, firstly by the player to the left of the winner of the bidding process. Three more cards are similarly played, one from each hand in rotation, to constitute that trick. The winner of that trick (the one with the highest card) plays the first card in the next trick. The other players must play a card from the same suite if they have one – they must follow suit. If a player is unable to follow suit, they may play any card. This continues until all cards are played and the winning bidder is assessed against their bid. If they win or loose they score points (or loose them) according to a designated scale.

Now the actual play is easier than it first seems from the above description. But the good news is, there will be a bridge club somewhere near you. Usually these clubs run beginners courses for those wanting to play bridge. To find the nearest bridge club in Australia, go to http://www.abf.com.au/ and follow the prompts. The lessons will introduce you to the rules of the game and the protocols of bridge. Not only will you learn a game that’s great for your brain but by joining a bridge club you will develop a whole new set of friends.

From David – edited by Jim and Ken