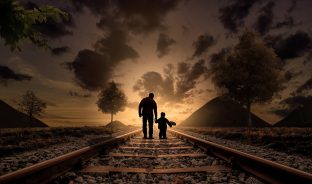 For many years, I’ve asked people about what they base their life’s values on.  Many people tell me they live by the Ten Commandments. Now I haven’t done any research on this issue, but I believe if I asked them to tell me what they were, I might get three or even four on a good day. But if you can’t name all ten either, don’t worry too much, because I’ve seen some research that said even bible college students could name no more than four.

Of course along the way I have run into some blokes who would describe themselves as Atheists. Usually what followed was an awkward conversation since for a few years, I was a Baptist pastor. However, I usually let them have their rant and tell me they think the weakest people in the world were Christians because they leaned on the crutch of religion and were unable to face the real world. Often, as they reached the end of their rant, it would lead to either them or me changing the conversation to the weather or something we could actually find some agreement on. I never got to hear what values they base their lives on.

But there are many other people I’ve met, who describe themselves as Christians and these people usually say “believe in God but…” The conversation then often goes into the area of the busyness of their lives and their inability to go to church or something someone once did or something like this…

I’m not sure how you would finish that sentence “I believe in God but…” You can fill in the blanks for yourself with whatever going on in your life.

Curiously, the very 1st of the 10 commandments, addresses the issue of what comes after the “but.” And I don’t believe the order of the commandments is a random choice. The 1st one is the one on which all the others hang. If you get this one right the others are a whole lot easier to stick to.

Do you know what it says? Exodus 20:2 “You shall have no other gods before Me.” So God says, “I demand top priority in your life. I’m not going to play second fiddle. It’s all or nothing.” And God deserves to be number 1 in your life because He made you. If He hadn’t made, you wouldn’t be here. Everything you have in life is from God because He’s given it to you. So this commandment is talking about things that dominate your life,  or things that controls your life. Mostly it’s good things that were created for us to enjoy, that take 1st place in our life.  But God says, ” I deserve 1st place in your life and I demand it.”

This is the foundation of my life. Yet so many people today who say they live by the 10 Commandments want to say “I believe in God but…” and what follows the “but” is what they put first in their life. Unfortunately that leaves many of us with a gap in our lives – a gap between what we say & what we do.

Now if that’s you, you’re probably into gap management, because we seem to notice these inconsistencies and try to sort out in our mind a way to reconcile this obvious gap. We usually succeed – often for many years. Sometimes it’s by distraction and we get so busy we don’t have time to think about it. Sometimes it’s about finding our purpose in what we do – convincing ourselves, we are making a difference in the world.  Then we retire and all our props are knocked out from under us. Your friends disappear and your whole life’s purpose suddenly collapses. Then we are forced to work out again what life is all about. So maybe it’s a good time to get back to the first commandment.

I could simply tell you God will judge you one day, so you better get your act into gear. But you already know that, and it hasn’t provided much motivation for you nor me so far. So instead, I want to talk about adoption. No, I’m not suggesting you go out and adopt a child so you can find your purpose in life. Though if you want to do that, and have the energy, go for it. The adoption I’m talking about is the adoption that can happen TO YOU- not through you.  Stick with me – it will make sense soon (I hope).

Paul once wrote a letter to a church in Galatia which was a town in Greece in his day. It’s included in the bible you probably have on a shelf somewhere.  He said…

“If you belong to Christ, then you are Abraham’s seed, & heirs according to the promise.” Galatians 3:29 NIV

He’s saying that you can be an heir and receive his promises. You get all that because you can be adopted into his family.

Now if you are still with me, I need to point out that adoption in Paul’s day, was a bit different to what we think of today. The single most important aspect of adoption in Paul’s day was the connection between adoption and inheritance. In our day, we mostly think about adoption as something we do for an orphan, to give them a family. In the ancient world – especially in ancient Judaism, any orphan child would be cared for by other relatives,  and there was no formal, legal adoption process attached to that.

Adoption in that world, was mostly done by the wealthy and it was about passing on the family’s estate & the family’s line to a next generation. It was done to ensure the survival of a family. The father was wanting to make sure his family, his estate, his influence would go on into the future but if he did not have any male heirs that was a problem. So the father would select a male heir through the process of adoption.

So to be adopted in that world  was a tremendous honour  & a fabulous opportunity. To be adopted by a great, powerful,      wealthy father was like winning the lottery. It was the chance of a lifetime. He was promising to bless you with everything he has. You could carry on his name. You would honour the things he honours and so that you could extend his influence throughout the world. And anybody who was a adopted, would have all his debts paid out immediately by his new father.

Now if you’ve been adopted by God, it’s not just you can look forward to a great inheritance like Paul is telling us here; but it means right now you are free from your moral debt. If you’ve ever have done anything wrong, if you ever carry any guilt or shame or regret, Paul is saying you’ve been adopted by God, and you don’t have to carry that around anymore. You’ve been released. You debt is cancelled. So when you wake up at 3:00am and you remember something that makes you want to shudder or cringe, when regret or shame or guilt comes over you just point to your heavenly Father and say, “Take it up with Him.” He is the one who takes all that away.

So are you living like that? It seems to me, that if we live with the idea that we are heirs to God’s kingdom, the rest of the commandments will be easy to keep. The idea that we can please the Father who has adopted us into His family by keeping them is just terrific. Of course it’s hard work to live that way, and we will all make some blunders here and there. But even then, Paul says, we have no debt because all our debt has been paid – all the mistakes we’ve made so far and those in the future we haven’t yet made. The only requirement for that to be a reality in your life, Paul says is if you want to be an heir in God’s family, you just need to “belong to Christ.” I’m sure you can Google that and find out exactly what that means if you don’t know already. If you can’t find an answer add a comment and I’ll respond to it.

So why not pull down that bible from the shelf, find your way to Exodus 20 and read again the 10 commandments. It may just change your life for the better today.