I am the keeper of the family photo album and have scanned into my computer all the photographs from as early as 1917. Many of them need sharpening, de-noising and spot or scratch removal. However, some of the older pictures are really out of focus or the camera was moved as the shot was taken. This is a typical example taken in 1919 of my aunty and her husband.

So how do we fix these photos?

The first step is to use whatever automatic systems are built into your photo correction program. I have lots of photo adjustment programs on my computer. So I get to choose which one to use. They all give much the same results in automatic mode.  In Apple Photos that means selecting the magic wand button on the top right hand side. Adjustments will then be made to the contrast and brightness to make the picture look a little better. In the Photoshop Express program it is similar – choosing “Enhance”, then “Auto Smart Fix”.

The Luminar program requires choosing a presets from the bottom of the screen until you find the one that makes the difference you like.

You should also fix the dirt spots and scratches using the retouch button in Apple Photos or the band aid button in Photoshop Express. In Luminar you need to select the Erase tool, then select all the spots you need to correct and “Apply” to see the results. All the photo editing programs I use, seem to now recognise edges so if you correct a scratch or spot that covers say a window sill in the photo, it will look right.

The next step in Photoshop express is to choose the Enhance > Auto Shake Reduction and Enhance > Auto Sharpen. Sometimes they do what you want. These buttons achieve little with this photo, because it was scanned Photoshop Express assumes the scanners dot size is the photo’s dot size. The result is a more visible grain coming from the scanner and a worse looking picture.

There is another button Enhance > Unsharp Mask. This seems to be the same as aperture correction in the TV world.  It does give three adjustment levers – Amount, Radius, Threshold. I’m sure you can work out what the amount lever does. The radius slider enables you to choose the size of the underlying defocus effect. Threshold is adjusted to ignore the smaller grain. Unfortunately I couldn’t find any adjustments that solved the problem, I certainly got rid of the smaller scanner grain with the threshold and radius sliders, and found at a radius of 8 pixels, the eyes became clearer.  However at those settings, introduced a pattern all over the photograph.

Apple Photos has a Sharpening tool in the adjustments window. It has three sliders – Intensity, Edges, and Falloff. Once again they did wonders for the small pixels but simply made the picture look very grainy.

Luminar has sharpening presets and with each preset, you can adjust the amount of correction. In my case I chose the “Detailed” preset. By adjusting the amount to 75% and then setting the Clarity slider and Softness slider I was able to improve the photograph marginally.

I also have a program called “Tonality” which is specifically for black and white photographs. However in this case, it was not able to improve this picture any more than its big brother Luminar. Maybe that’s why they discontinued the program.

I also have two other sharpening programs I’ve collected over the years to “refocus” pictures like this. One is called “Back in Focus”. This one is supposed to correct, out of focus photographs, but doesn’t do much for motion blur. When you eventually make it to the adjustment mode  – by double clicking on the photo after you opened it. There are no directions and no menu item, this program has a slider on the right hand size called Radius. This seems to set the radius of the blur correction. So you can adjust for the original dot size and ignore the scanner induced dots because they are much smaller.

Just above the radius slider is a selector for a number of different algorithms for correcting the blur. You choose which one to use. My maths is not good enough to figure out which one to use so I have to experiment. Unfortunately there also is no description of what the other sliders or the masking buttons do. So you need a lot of time to experiment and see if you can work it out. After a couple of hours experimenting, I was couldn’t find any settings that helped me get anything much better than the original. I found lots of settings that made things worse but if I squinted a lot they all looked better!

The other program I have is called “Blurity.” It’s available for Windows here. You can try before you buy but it puts stamp on the image. This program is a bit old now since the latest information about dates I could find on the website was 2015.  This program claims to be able to remove motion blur as well as focus issues but the website says

At least this program has more information on how to use it and a manual available. The first step after loading the photograph, is to select a portion of the picture where the focus issues exist. In my case that’s the whole photo but I selected a section with horizontal and vertical lines to give it some help in figuring out the blur parameters. By clicking on an area in the left hand window, a red box appears.  They say this is a vital part of the process because moving the red box a few pixels can make a huge difference in the results.

Next, using the Basic settings you “Process” the photo. It takes a while to process but eventually the processed picture appears in the right hand window. You also have access to the “Blur Severity” slider so experiment with that too. Sliding it to the right or left then process the picture again. Set this slider to the amount just short of where double data begins to appear after processing. You also need patience because pushing the “Process” button after each adjustment takes a while. 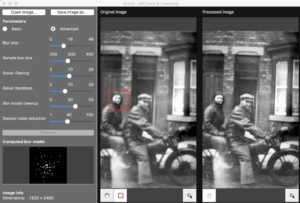 After you have something set up in the Basic settings, choose the Advanced button. There you’re presented with a host of controls to fiddle with.

I spent a few hours experimenting and the best I got was this picture. It is better than the original. This picture does look sharper but it also has higher contrast. It doesn’t improves them to the point I was hoping for. Is either of them worth $100.  I doubt it. They were better then the other programs at not making the scanner grain worse but the improvement in the focus was marginal.

In recent time Topaz Labs have released a suit of programs that designed to enhance a photograph. There is DeNoise, Sharpen and Gigapixels. I have spent a few hours on this picture. If I used DeNoise first then Sharpen I improved the picture – especially the background where there was a lot of noise. Of course it’s not feasible for any program no matter how much AI is built in to add details that are not in the original photograph. The best you can hope for is the details that are there will be enhanced with not too much random noise added. Using too much correction means things like the faces and eyes get distorted.

The programs from Topaz are the best and easiest to use of all the programs I’ve come across. BUT don’t expect miracles. This photo is an example of one that will never look much better. Sure I can improve the noise and can improve some areas of the photo more than others through masking. But unfortunately, it’s too out of focus and too small to make much out of it. After hours of fiddling here the before and after pictures side by side. Unfortunately this is the best I can do.  See if you can tell which is the original and the “fixed” one… .

This had the most promise because it was adjustable for the amount of sharpening, the radius and the detail and has masking as well. So you sharpen some bits and not others. But the old version I have, has a maximum radius adjustment of 3 pixels. I need about 8 – judging by  the programs above. So I tried making the image smaller to double this effect but the was still insufficient adjustment and the image was getting rather small. Later versions may have different adjustments and be able to work better but it will cost money to find out.

But again it could not give me anything worthwhile other than increasing the scanner grain.

This used to have the advantage that you can brush in the corrections so instead of the grain increasing all over the photo, it only increases in the areas you brush over.  Again there are adjustments but none that allow me to set the correction radius size to the original photo grain size.  I really like Aperture and the way it works – especially the way you can adjust the brush size by using two fingers on the trackpad, but Apple lost interest in it and discontinued it so unless you have it already too bad.

Many are available.  Of the two I tried, neither was able to make the picture look better than the original.

This will make the image bigger for printing and it improves the image as it does so. Unfortunately this image is just too bad to ever make it look good.

So that’s 10 different programs plus 2 online programs I’ve tried with little success. I’ll experiment some more and if I ever succeed, I’ll write another blog and tell you how I did it!  Then I’ll apply that knowledge to the 300 or so other family pictures I have. Of course if you have a program or some procedure that does better than these programs, please message me using the contact button or leave a comment.