If you are effected by the Centrelink assets test, you know your pension goes down the more assets you have. Unfortunately you have few options to solve this problem.  You can and should, revalue your assets often (like your car), you could go on a holiday, prepay for repairs, shuffle money to a spouse that’s under retirement age (or maybe you have to go and get one first which could be expensive) or you could spend money on something that will save you money in the future.

If you don’t have a solar system, my first choice would be to install one.  I have had a solar system on my roof for 5 years now. My system is only a 2Kw system installed by a firm that went broke years ago. But since it has been quite reliable and since I haven’t paid for electricity in the last 5 years – it has paid for itself well and truely. It has saved me at least $1200 per year because my electricity costs used to be about $300 per quarter.  So I’m not overly concerned that it’s not covered by warranty anymore. However, I installed my system when the feed in tariff was 47c per kilowatt hour. That means, the power company pays me 47c for all the electricity I generate and don’t use in my home.

What does that mean?

Just before I go on let me explain those terms. The Electricity I use or generate is measured in watts (usually measured in Kilowatts or 1000 watts because we use so much). So if I generate 1000 watts for one hour, that’s called a Kilowatt Hour. My solar system generates between 50 and 80 Kilowatt Hours per week depending on the weather.  My electricity bill says I use around 7 KwH per day (49KwH per week) in excess of the power I generate.  But the fact is, during the day, I usually generate more power than I use in my house. The left over, is sent back down the wires to everyone else. I have a smart meter that can tell whether I’m using power from the grid or sending it back. I get paid for the amount I send back to the grid and I pay for the amount I draw from the grid. The amount I send back or the “feed in” attracts 47c credit for every KwHr sent back. I currently send back around $3 per day more than I use.

Unfortunately the 47c deal is no longer available and if I move house, I will lose the high feed in tariff as well. So the question is “would I still install a system with a lower feed in tariff?” Is it still possible to reduce my electricity costs on my usage? 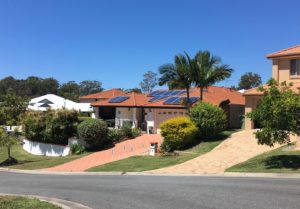 The answer at the moment is YES. I may not be able to reduce my bill to nothing or make a profit but I can make a significant difference in what I am charged for electricity.

a. If I generate enough electricity to cover what I use in the day time, it will reduce my power bill by about 24c per KwH because, what I generate and use, does not cost anything. So if I generate all the power I use during daylight hours, the power usage cost for that period of the day is $0. Of course I will still need to use grid power during the night but if I can generate enough so I send some back during the day, I will reduce the cost of that power as well.

Today, I can install a 6Kw system at the same price as my original 2Kw system. For me that means I will generate 3 times the electricity of my existing system. Logically, if my usage doesn’t change, I will export at least 3 times what I currently send back to the grid.  The actual amount exported will be MORE than 3 times that I send back now, because I currently use some from my 2Kw system. Don’t worry if that sentence doesn’t make much sense, just believe me when I say I will send back at least 3 times. So even though I can’t get 47c/ KwHr I can get the current feed in tariff of 6c – 10c in most Australian states. So assuming I can get 8c, if I export 3 times as much as I send back now, I’m getting the equivalent of 24c (8 x3). And if you can get more than 8c (my supplier is currently paying around 12c) you will be better off again.  All the exported power will help pay the cost of the after hours power and hot water heating you use.

In addition every hour of electricity I generate and use at home, will save me around 24c off the bill. That is, I wont have to pay the electricity company for anything I generate and use. So if I do the washing during the day, run the dishwasher, do the ironing (or better still, get someone to do it) during the day, I will use what is coming off the roof instead of from the grid and save 24c per KwHr.

So most solar companies say you can earn back the cost of a system in about 5 years. Mostly, you do that by the amount you generate and use yourself rather than the amount you get from the feed in tariff. So if it’s true that you can repay the costs in 5 years, it means the effective interest rate is 20%. That’s 10 times what the bank is offering in interest.

In addition, everything I spend on house repairs or renovations should not count as an asset because it’s on the house I live in, which is exempt from the assets test. Centrelink seems to only be interested in the profit you make from the system and unless you can get a better feed in tariff than what’s on offer, or really minimise your usage, you won’t make much profit!