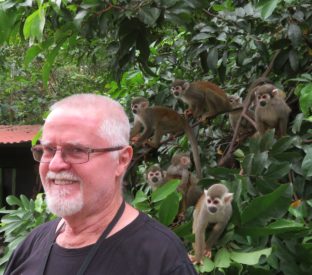 Peter has retired and he decided to volunteer in a school in Colombia South America to teach English. His experiences in getting there were covered in our first story here.

Since I last wrote I would like you to know that I haven’t tripped over, I haven’t fallen out of the hammock and I have not had another nose bleed! A crazy friend who climbs the highest mountains in the world for fun, told me that it is not uncommon for nose bleeds to occur at altitude. I do get mild altitude sickness symptoms when in Bogota (it’s 2600m above sea level) such as shortness of breath, and a fast heartbeat. Just walking up three flights of stairs at the hotel in Bogota is a bit of an effort. I hope your not thinking I am unfit… though you are probably right.

My last trip to Bogota was successful and I now have my Cedular de Extranjera (Foreigners Visa) which allows me to stay in the country until 28th January 2020. It took less than five minutes at the Immigration office to pick up my cedular but since we are about four hours by taxi from Bogota, I still had to stay overnight there and return the next day. I can leave and enter the country as many times as I like while my cedular is current although, I will be staying put here. All up the cost of getting this cedular and accommodation and taxi fares was a bit over $AU500.

There are 73 students in the school here this year. There are 30 girls and 24 boys who live in and there are 11 girls and 8 boys who are external students. I can at least remember the names of the students who I met here last time, but some of the new students names are difficult to pronounce and remember. The majority of the live in students are indigenous . A couple of examples of the names……. Dioniceeldo…… Yoraima….. Yoberli….. Daditnedy….. Miyerlay.

The live in students are fully funded from Open Doors International which in turn is funded from generous churches and individuals around the world. The external students pay full fees for their education which helps towards overall costs of running this place. Some income is derived from the farm here and in 2017 that was about 40 % of the total running costs. The main farm income comes from the sale of chickens and eggs and pigs. Of course pigs are slaughtered for our consumption as well. A few weeks ago a cow slipped on the concrete floor of the shed and broke a leg and so it was slaughtered and we had quite a bit of beef for a couple of weeks.

The Difficulties of Teaching

One of the difficulties in teaching English here, is that the language abilities in each class is very mixed with the result that more one on one time is needed with the beginner levels without the more advanced students losing interest. There are a couple of young indigenous girls here who are not even fluent in Spanish and have never heard English being spoken before. Thankfully there are two young female volunteers here from Denmark who are so helpful in the classes. They have pretty good grip of Spanish which is a major asset. Sadly they will only be here until the end of May and I will miss them and their help. The bonus for me is they speak English pretty well too. It would be so good if the classes could be divided into language abilities but that will not happen.

The weather here remains hot and dry. Temps range from low 20’s to low 30’s every day with no breeze and so far only a few millimetres of rain. We have run out of water a couple of times. The well takes time to fill up from the rain and so water is pumped from the creek each day. Even the flow in the creek is very slow at the moment.

The wet season is beginning and we get storms at least every second day or night. It is fairly common to experience a blackout when we get one of these storms. The blackouts can last up to six hours at a time and of course the internet isn’t available either. The night time temps are dropping a little and in fact I have turned the fan off on at least two occasions recently.

Crime is all around.

At the moment there is no direct threat posed by the armed “narco traffic criminal gangs” in this area, however, there is still a lot of criminal activity here. Two Danish girls were in Villaviencio ( 25 klms from here) two weeks ago with a staff member and while standing in a crowd at a market a man sneaked up behind one girl and tore the ear rings off her ears and bolted. Thankfully she only suffered a minor injury. One of the female teachers was on her way home from work and was near her home when two men approached her and one was armed with a pistol and they took her purse and mobile phone.

On the national scene the incidence of violence has increased since the so called “Peace Agreement “was implemented. There are more armed criminal gangs operating now than previously and they are all jockeying for control of various areas. These gangs want to control certain areas so they can transport their product to the coast without interference. Just in recent weeks some 2000 to 3000 people were displaced and three churches were closed in an area so that there would be no interference to their business operations. One pastor refused to take three armed men across a river and later that day they went to his house and shot him and took the boat anyway. In case you are thinking that his boat/canoe was a luxury item think again. There are no roads in a lot of these remote areas and river transport is the only means of travel. There is one student here from the Amazonia region and it is is a major effort for him to get home. It takes two hours in a DC 3 to travel from Villaviencio to Mitu and then four days from there by river to get home. If the family cannot afford to fly it takes between three and four weeks to get home via the river systems.

Next month I will be travelling to Monteria and Santa Fe de Ralito in the north of the country near the Carrabean Coast to get an update from local Pastors about the situation in their areas from before the “peace agreement” and what has happened since and is happening now. I will give an update about this in Chapter 3.

Next week is holy week here this being a predominately Catholic country and so the children are on vacation. Unfortunately only a few are able to travel home due to the distances involved and the associated costs. So there are no classes but all the daily duties continue. There is a group of students here from a bilingual school in Bogota who will be conducting various activities with the children for the four days of their stay. I was sitting at a table a couple of days ago with some students and was thinking about the different languages that were present. For a start each child is already bilingual and trying to learn a third language (English). There were children from four different indigenous tribal groups one Afro Colombian and one of Spanish descent and me a one language gringo. I look forward to the day that language will no longer be a barrier between people.