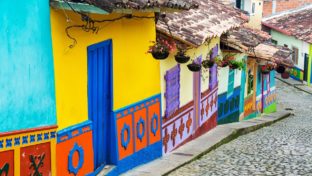 The journey so far has been very interesting starting with my departure from the Gold Coast in January. During the flight to Sydney, the captain said that due to Air Traffic Control issues we would be put into a holding pattern. We continued to circle around and around as I watched the time for my connecting flight gradually shrinking then disappear. So I had missed my connecting flight.

Qantas booked me into a hotel overnight, but there were no Premium economy seats available on the next flight so, I was allocated a seat in the second last row – the exact opposite to my much contemplated Premium Economy seat. But at least I had two seats to spread out my junk.

The next flight from Santiago to Bogota was completely booked so it was another overnight stay in Santiago courtesy of Qantas. My hope of celebrating my 71 st birthday with friends in Colombia vanished. So I celebrated my birthday with a good Chilean meal and a fabulous buffet breakfast all by myself.

My last entry into Colombia was far from smooth, and I was nearly not granted access into the country at all. I was hoping for better this time. However, there were the contents of two 747’s (about 800 people) all tired and a bit cranky lined up to enter through Border security. There were about 24 booths processing the entrants. As I got closer I prayed briefly “please Jesus could I please go to a booth where the officer could speak English”. When my turn came the the officer directly in front beckoned me forward . And yes he could speak English and I was processed in five minutes.

I had a tourist visa valid for 90 days. The next hurdle was to apply for a one year visa as a volunteer English teacher. At the office in Bogota, all the legal documents were collated and an application was submitted along with a payment of course. No acknowledgement was received in time so I planned to travelled by coach to Cumaral to meet my friends. I arrived at 2.30 am. I was intending to return to Bogota to continue the visa process at a later date. When the acknowledgement was received, it was too late to do anything. So I planed to return Monday morning by taxi to Bogota. That is a four hour journey and I booked a taxi for 4am Monday morning. 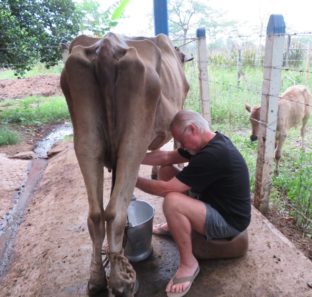 It was such a warm and wonderful greeting from the people I knew in Cumaral.  There were many new children in the school this year and so I had many new names to learn.

But on Sunday night as I stepped out of a cold shower, my nose started to bleed and would not stop. The solution the staff said was to use ice water by pouring it on my nose and basically all over my head! It was so cold and it was like having brain freeze all over my head. This went on for about one and a half hours with no result. They then decided to take me to hospital. Blood pressure, pulse and temp all good. My nostril was packed with some sort of gauze that felt like it was a few hundred metres long. The bleeding stopped at last but the packing had to be removed in 24 hours.

So I had a dilemma. I had a taxi booked for 4 am next morning and I arrived home at 12.30. This was too late to cancel booking so it was out of my hands.  I decided not to rebook a taxi until Wednesday morning to make sure any bleeding had stopped.

When Wednesday morning came I travelled to Bogota to continue the visa process. Another amount was paid online and I then had to go to the Immigation Office in person. That process went very quickly, and then it was onto the next step. This involved another form to be submitted online. Thankfully I was able to contact the office who submitted the form on line and then when it was accepted they forwarded the approval number to me straight away and I was able to take the next step. 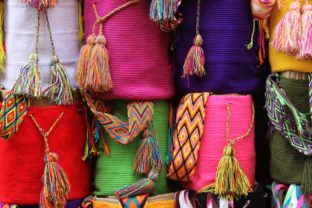 Armed with the approval number I joined the que at booth 20. Eventually my number came up, and I was photographed and fingerprinted and ready for the final step. My plastic ID card with my photo and fingerprint will be ready in five days. So one more trip to Bogota and I will have legal status in Colombia until the end of January 2020. Of course, another payment had to be made at this stage.

One thing I have to come to grips with is my ageing body. The spirit is willing but the body isn’t. On my first day at the office, I tripped over an obstacle I didn’t see, and landed flat out on the concrete. No real damage. Later on the same day, at a restaurant, I missed a step and nearly hit the deck again but recovered in time. Two days later, while mounting a hammock, I landed on the deck again. No damage from all these things except a bit of a reality check.

So begins my English teaching adventure. So far, in the last month, I have managed to teach English to one class but I wouldn’t have it any other way. Helping disadvantaged kids helps me find meaning and purpose in life.