The Best Place to See The Red Centre 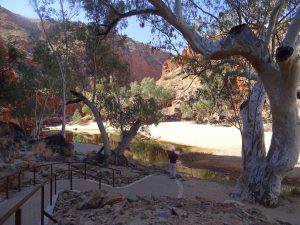 Where to go for the Best Place to See the Red Centre?

Around 135 Km west from Alice Springs is Ormiston Gorge – a popular swimming spot with a river running through a scenic gorge with steep walls of red rock. It is unbelievably beautiful and a must see when you are in Alice Springs. It has towering cliffs, cool waterholes and fantastic bush walks.

The five minute paved, wheelchair accessible Waterhole Walk, gives access to the main waterhole which has water all year round.  This and the 20 minute one way Ghost Gum Lookout Walk are the most popular with visitors.

Another way to explore the area is by walking the Ormiston Pound Walk, which is a three to four hour circuit that follows the rocky slope into the flat expanse of the pound and back along the gorge by the main waterhole.

Geologists tell us the spectacular vertical cliff on the western side of Ormiston Gorge is mostly quartzite – an extremely compact, hard, granular rock consisting mostly of quartz.  The upper part of the cliff is a fold containing a horizontal Quartzite layer. Around 1km upstream is Ormiston Pound and the waterhole is surrounded again by Quartzite cliffs which has been thrust aside, somewhere in the ages past. In that process Ormiston Pound granite intruded into the cliffs.  The granite has weathered over the years much more quickly than the Quartzite and now forms the sunken floor of the pound. 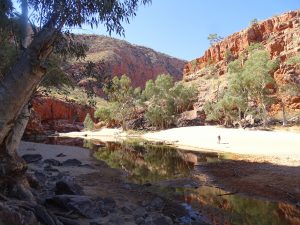 The Aboriginal traditional owners of this region – the Western Arrernte people, talk about the dreaming story which a group of Emus came to the waterhole from the East, and were hunted by a man whilst they were there. Ormiston is a sacred site to these people. It’s name in Western Arrernte is Kwartatuma.

On the other hand if you subscribe to creation theory you will understand the gorge exposes thick strata that were deposited very early in Noah’s Flood. The strata, stacked in pancake like sheets, shows the sediment was laid down by high-energy flows of water. Later during the flood,   enormous forces in the earth’s crust slid the rocks across the earth, bending and cracking them. 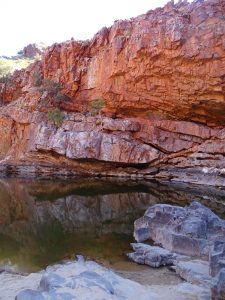 The creek that runs through the gorge, enters Ormiston Gorge flowing west and changes direction in the gorge to flow south. Downstream of the gorge the creek flows through the rocky ridges that run in an east-west direction.

Whether you think the water was there because of a vast inland sea or Noahs flood everybody agrees that as the water level dropped, the high parts of the ridges emerged, and the receding water was flowed through low parts, cutting a gap. As the water continued to drain through the gap,  the gorge got deeper and deeper.

For an relatively easy climb of about 15 minutes take the trail up to the Ghost Gum Lookout. From the top of the gorge walls you can see back down to the red cliffs of the gorge in one direction, to the camp ground and ranger station in the other and across to the hills on the other side of the gorge. You can also take the Pound Walk which will take you 3-4 hours but is a great walk if you have time. The red walls of the gorge glow in the sunlight and make a spectacular site. Which is probably why this gorge is one of the most photographed places in central Australia. 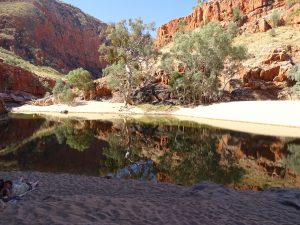 The waterhole in the gorge is there year round and is great for swimming, especially in warmer months. It is estimated to be up to 14m deep at its southern end. It has fish and of course birds. So something else that’s popular here is birdwatching. We ran into two Canadian couples who were there for a twitching experience. They did tell me what they hadseen but since I had no idea what sort of bird they were talking about so I just said “wow thats great!” I guess it was some sort of duck!! There are reportedly dozens of birds here and some of them are Central Australia’s most sought after birds. 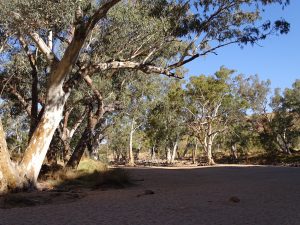 On the way into and out of the gorge, you will past the many spectacular trees – the river red gums. These are common trees seen in Central Australia growing along the banks and even within the river bed. To the original inhabitants, the presence of healthy River Red Gums, are one of the indicators of water not far below the river bed. These trees must be able to withstand long periods of drought followed by periods of severe flooding when the rains do come.

You can camp in the camp grounds at the gorge. It’s only about $10 per person per night but it is very popular  especially in the winter months so plan to be there early.

So what are you waiting for? My advice is to get there as soon as possible  – though I’d probably wait till the weather is suitable. It can get very hot in the summer and cold in the winter! It’s early winter here and today as I’m writing this, it’s 13 degrees Celsius in the late morning at Ormiston gorge after an overnight temperature of 6 degrees.  I think today would be a great time to be there.