For a long time now, I’ve wanted to see the northern tip of Fraser Island. The problem is, it is a very difficult drive. It’s over 30 years since I last tried to drive it, but back then I got bogged right down to the axels, about half way there and I gave up. 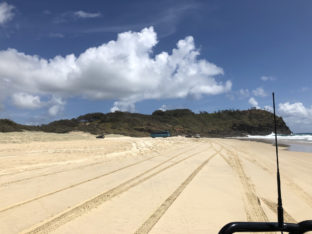 Fraser Island is a sand island. That means nearly all the tracks on the island consist of soft sand with deep wheel ruts either side. So you must drive a 4 wheel drive vehicle to go anywhere on the island. In fact you need a 4 wheel drive vehicle to even get to the barge on the Rainbow Beach end or to get off the barge on the Fraser Island end. Of course, once you are on the island you can drive on relatively hard sand on the beach at up to the speed limit of 80Km/hr, provided it isn’t high tide!

across the beach to the sea. Often they are almost invisible as you drive towards them and you get a shock as your front tyres suddenly drop 150mm into the water.

To drive the length of Fraser, you would probably take a couple of days. It’s about 120Km from bottom to top. So, the previous time, I stopped in Rainbow Beach and purchased a camping permit and a plastic sheet that would act as a tent. The theory was the kids would love to sleep in a tent. They didn’t. They slept in the car and we slept outside under the “tent”. Well I slept, but my wife decided to stay awake listening to the sounds of the bush all night in case something approached us that we didn’t like! 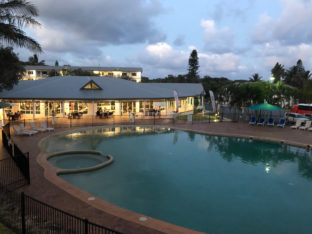 Now as you drive up the beach, everything goes well for the first 60 or so kilometres. Some places hat are tricky to navigate for the first two hours after high tide but there are tracks around most of the tough spots.  You get to see many stunning coloured sand formations. Then you pass the resort at Eurong, Eli creek and the Maheno wreck, the Pinnacles and the Red Canyon. They are all worth a stop.

Eurong is a place where you can purchase a pie or some bread rolls in the bakery. You can buy a torch if you have forgotten one and a Telstra SIM card since Telstra is the only available network on most of the island. You can even buy a packet of ready made batter to use on the fish you will catch if you are lucky. 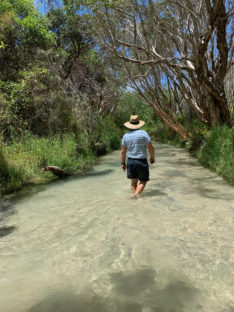 This is a beautiful creek a few meters across. The water is so clean it’s almost transparent as it rushes out to the beach. I guess its got the biggest sand filter in the world to clean it.

Every time I’ve been there, people were walking in the water or floating on their blow up toys and just enjoying the fantastic location amongst the trees. Although the day we were last there there were two tour busses and probably a dozen other vehicles. Yet, it is so spread out it didn’t feel crowded at all. The sand on the beach is a bit hot in the middle of summer but it is just tolerable even in bare feet.

This is the remains of a ship that once sailed through these waters. She had been sold for scrap and was being towed to the wrecking yard in Japan  when she got caught in a cyclone in 1935. The tow rope broke and so she has been stuck on the beach ever since. She seems to be disappearing into he sand as time goes by and every time I go there there is less to see. 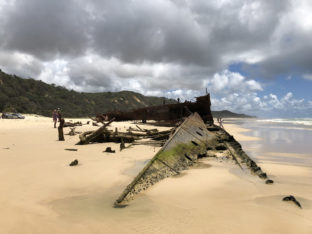 Heading further north from the Maheno, the beach is easy driving for the next 80 or so kilometres, as long as you keep and eye out for the creeks and the washouts. After about 2 or 3 hours driving, you come to Indian head. This place is burned in to my memory because its here I got stuck last time.

Indian head is a rocky outcrop extending out into the ocean so there is no beach to drive on. If you want to go any further, you have to drive on the sandy bypass track at the back of the headland. That may not sound like a big deal but it can be. As we arrived there this time, we had to wait as another vehicle was pulled out of the soft sand. Of course the dry weather for the last couple of months means the sand was particularly soft. There is no vegetation left for you to put under your tyre if you get stuck. So you should carry some plastic tracks – you may not need them yourself, but the person in front who is stuck and blocking the track will probably need some to help them get moving again.

Usually these days, when you get stuck, you can find someone to pull you out. One of the rangers told me they had pulled 30 people out of the sand the day we were there, and one vehicle got stuck so badly, they had to get a tractor to pull him out. If you have time, it’s also possible to follow a walking track to the top of the headland provided you can find a place to park without blocking the track. 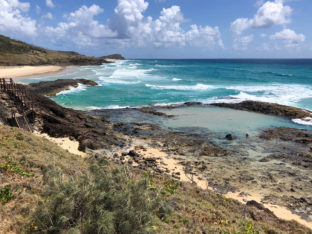 Getting past Indian head is, however, only the beginning. A few kilometres further north is another rocky outcrop which again requires you to drive on the bypass track. There is a parking place at the top of the hill and some toilets as well. From the parking area a walking track takes you down to the champaign pools. You may like too take a swim in the pools but they can get quite warm in summer.

The track here then takes you a few kilometres to the northeast facing beach bypassing altogether the Waddy point headland. Again, it’s a soft sand track and requires some skills in driving through to the beach. Do take particular note of the place where the track enters the beach because finding the track on the way back is not all that easy. We missed it even though we had a GPS recording out our movements but we eventually found another track a bit further down the beach. 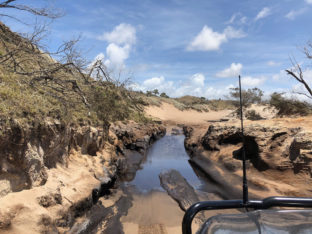 Problems on the Rocks.

The next problem you face is another bypass track behind some more outcrops – Ngkala rocks. It may be possible if the tide is low enough to drive around the rocks but most of the time you have little choice. This track begins with a drive through a pool of water and then a steep drive up a sandbank as you travel north. The water was about knee depth, but the track is reasonable solid underneath. You will need some speed to exit the pool and make your way up the hill that follows. We were stopped on our way back by two other vehicles stuck to the axels in the sand. We had to use our plastic tracks to get them both out of the difficulty.

Once you have managed to get through all these bypass tracks, it’s fairly easy 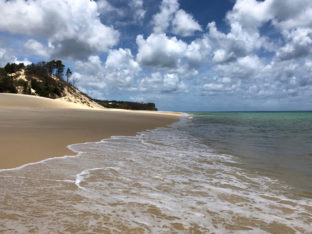 driving for the next 30 or so kilometres. By the time you get to the top of the island you are about the same latitude as Bundaberg on the mainland. When we were there, we saw turtles in the water and schools of fish swimming past. Although we tried to catch some fish, all we did was loose most of the bait we had with us.

There is a walking track a couple of kilometres long into the light house if you have the energy to take a walk in the soft sand up the hill.

Finally as you make you way down the inland side of the island, just a kilometre or two further on, there is a sign telling you to not go any further. I don’t know exactly why you can’t go any further but the sign said to stop so we did. 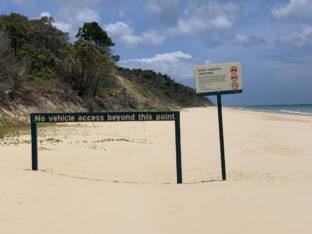 So was the trip worth it? Absolutely! BUT if you are going to take such a trip yourself, make sure you are properly equipped! Take some tow ropes to pull yourself and others out of trouble. Make sure you let your tyres down to as low as 15psi to drive in the sand (and take a compressor to blow them up again.) Take some plastic tracks to help you in deep sand and take a camera to record the details.

You will love it. 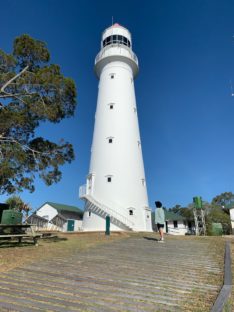 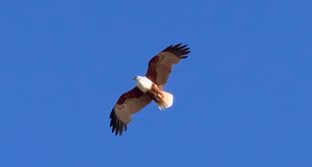 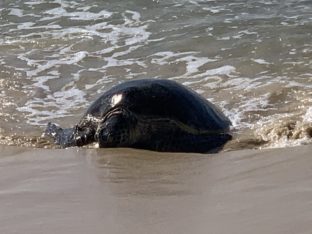