Research amongst baby boomer, suggest we are heading towards a retirement crisis that, despite what Superannuation advertising tells us, will make the issue of running out of money, insignificant by comparison. Many of us have high expectations about our ability to re-invent ourselves in retirement as well as our ability to stay young and relevant forever. But those things are often unavailable to us and ageing means some are very difficult, if not impossible, to achieve. Today’s seniors are from a generation that stressed self-reliance which leads to a reluctance to discuss financial and/or personal and health matters and our silence will bring us undone! Unfortunately this causes boomer’s to reach for solutions that can come back to haunt them.

Not Everyone Ages Well

The reality is not everyone ages gracefully; many are not as mobile or capable as they were before; many find themselves alone instead of surrounded by “peace and love.” The irony is, we used to sing with the Beatles, “Will you still need me, will you still feed me, when I’m sixty-four?”  For many of us, the answer we discover at 64, or 74, or even 84 is “No!”

The Statistics Say It All 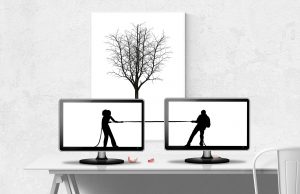 The statistics on divorce tell us that grey divorce (or Silver Splitters) is on the rise in Australia and the USA. The Australian Bureau of Statistics says “the median age at divorce has been increasing for both males and females over the past 20 years.” In addition, the overall divorce rate has gone from 2.9/1000 in 1996 to 1.9/1000 in 2016 – around a 30% reduction. But amongst those aged over 55 it has been the opposite. The crude divorce rates, according to the ABS, tell us the divorce rate has increased by around 20% for those aged over 55 in the 20 years 1995 to 2015.  So it seems to me, that we have the making for a massive paradigm shift in retirement that will effect a whole lot of people badly. Wikipedia say in Japan this problem is referred to as the “retired husband syndrome.”

Now its clear that grey divorce is not bad for children in the same way an earlier divorce can be, but it still will have a significant impact. Besides well being and mental health impacts, studies from America say “older divorced people tend to have less wealth than older married couples and even widowed singles” – I think that’s probably because of housing assets. One US study said “The net wealth of those who were widowed after age 50 is more than twice as high as the net wealth of gray divorcees”.

How to Avoid The Issue

So how can you avoid becoming one of the statistics? My belief is that your future happiness may very well depend on what you are willing to do about it today. There is no doubt that most retirees will discover they spend a lot more time with their spouse when they retire than they have for a very long time. If you choose to do nothing about that fact, the statistics are against you. Robert Laura from the retirementproject.org says “the fact is, the dark side of retirement is all-to-real, and requires new and existing retirees to make specific plans to help them avoid these dangers. Creating a successful transition from the workplace to life in retirement requires people to embrace the fact that for every hour invested in traditional retirement planning an equal amount of time should be spent on other issues…” such as “resolving relationship wants and needs before they turn into points of conflict..”

So where do you start? I wrote about one way to start as few weeks ago in this blog. It was rather generalised but I think, well worth a read but it requires you to do some research on each others personality and styles.  Unfortunately, many of us won’t do these things and we just hope it will work out some day. It probably won’t!

Some of us excuse the warnings we are given by our other half as them “having a bad day.” One man I heard of, was devastated by his wife decision to leave him and when his counsellor asked if he had any forewarning, he replied “she’s been saying she’d leave for years unless I made changes, but I didn’t believe her.” Don’t let that happen to you!!!

Don’t Just Read About It…

If you still find you have difficulties in your relationship and can’t figure out a way to move into a better future, get professional help from a qualified counsellor. It’s well worth the expense and time and trouble because it can save you a while lot of heartache and legal issues and problems with friends and wills etc.

So what are you waiting for? Don’t just sit there – go and do something positive NOW. You can make things better but only if you do something.