The Most Beautiful Island

Go to a Greek Island!

People have told me for years that I should visit the Greek Islands. I always said “yeah – one day” without ever intending to go there, but a year or so ago, we took a Mediterranean cruise and pulled into Santorini – one of the much spoken about Greek Islands. It was stunningly beautiful and was in fact, voted in 2015, as one of the most beautiful islands in the world. 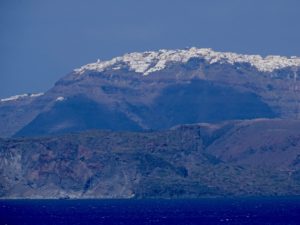 From a distance the Island looks a bit like a chocolate cake with white icing on the top. As you get closer the steep cliffs and houses perched precariously on the top come into sharper view.

Santorini is not just one island but 5 seperate islands arranged in a ring. It’s located in the south Aegean sea around 200km south east of Athens and apparently where the continental plates of Europe, Asia and Africa meet. Because of its location, it is actually the rim of a still active volcano. The main island once was round but now is crescent shaped and has been so since a massive volcanic eruption in 1650 though its shape has been changing since before 1500 BC.

There are normally about 15,000 people living here in 13 difference villages. Of course, in summer when the tourists visit, the population rises because each year, they host around 2 million visitors. If you visit during this time expect there to be a crush in the small streets and shops. Unless Covid stops you!! 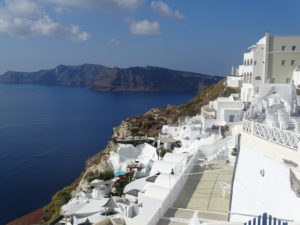 There are two small harbours and an airport to connect with the world. The old harbour supports only small boats but the new harbour can cope with ferries and reasonable size ships for brief visits to load or unload passengers or freight. The new harbour also allows busses or cars to pick up passengers and transport them to the villages at the top of the cliffs.

The old harbour uses either a cable car, steps (around 600) and donkeys to get people to the top. We chose to ascend the 300 metres high cliffs by cable car but overheard others talking about walking back down the stairs – which they said would only take 15 – 20 minutes. They were wrong! It took us around an hour. 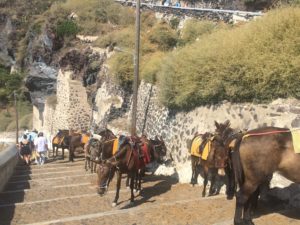 The walk back down had some great views of the harbour BUT since you shared the steps with the donkeys, the steps had lots of donkey deposits on them making them particularly slippery. We saw two women fall and injure themselves as they tried to descend. One woman was injured rather badly and had to call for an ambulance to help her complete the journey. Because she was almost half way down she spent a considerable time in agony waiting for help to walk up or down the steps.

The main village at the top in the centre of the main crescent shaped island is Fira. It seems you can have a house of any colour here as long as it’s white (though there was one yellow house)! It has many winding narrow streets, some shopping arcades and a section where some church nobility once lived. 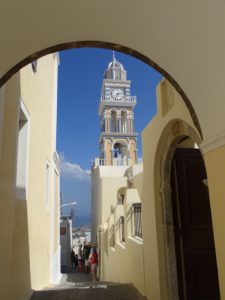 The view from the top is fantastic. The contrasts of the deep blue water, the white houses and rocky cliffs make a great picture. Of course getting a photo without a thousand tourists in it as well is not easy!

Santorini has no water resources so the locals have to import all their drinking water and try to collect as much rainwater for other purposes. In recent years a desalination plant has provided running, but non-potable, water to most houses.

Because the soil is so fertile, their main crop, grapes, grow easily. The winds that blow across the island means the farmers must grow their grapes as close to the ground as possible so they twist and braid the branches together to form a basket then place pumice stones inside and around the branches. The baskets ensure the fruit which grows inside the basket is protected from the winds. The pumice stones also aid the irrigation of the plants because they absorb the humidity and dew during the night and release it to the plants during the day. 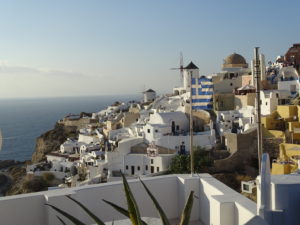 An ancient village has also been discovered on the island. It was found in 1967 buried under volcanic ash and pumice stone. The village once had two and three storied houses, paved streets and squares, hot and cold water systems and flushing toilets. Although its history dates from as early as the fifth millennium BC, there was an eruption 3,600 years ago which destroyed the village and most of the island. It also sent a tsunami towards Crete that brought to an end the Minoan civilisation there.

Some have speculated that this eruption in around 1500 BC corresponds with the Exodus of Moses from Egypt and may be the cause of the plagues. The tsunami or its aftermath may have also enabled the crossing of the Red Sea.

The island was unoccupied for many years after the big eruption in the early bronze age but was reoccupied eventually and the village rebuilt before vanishing again overnight in the 1650 eruption.

So should you go there? Definitely “yes” but allow yourself more than one day if you can to explore the many villages and beaches on the island and take lots of pictures. 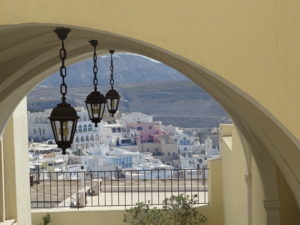 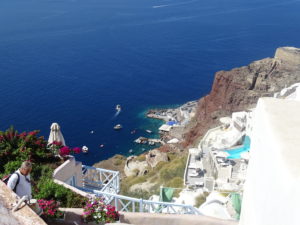 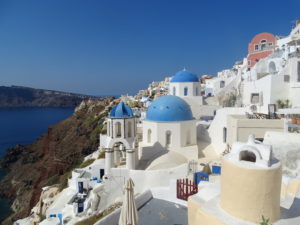