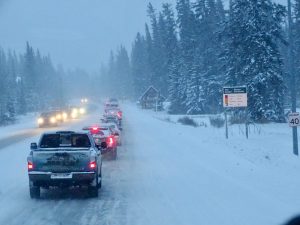 If you’re a regular on this website, you will remember that a few years ago my family headed off to the northern hemisphere to get our first ever white Christmas. I must admit that after sitting for years at Christmas in heat of around 35 degree Celsius (95 Fahrenheit) and reading Christmas cards with snow on them from family and friends, that year was a very different experience. To be knee deep in snow on Christmas Day and looking out at the scenery I’d seen on those cards since I was a boy, was to say the least – very exciting.

Now, right at the moment, we are heading towards winter again. But this winter here will have temperatures around 15 degrees – that’s plus 15. We returned home from Canada that January to the heat of mid summer here in Australia. But that’s a reminder that it’s not winter forever! It rarely changes as rapidly as our flight from the Northern to the Southern Hemisphere, but winter comes and goes every year. There is also spring, summer and autumn in most years – though we usually don’t really have all those distinct seasons here in sub tropical Queensland.

You may remember the Seekers song that started “To everything, turn turn turn , there is a season, turn turn turn.” Well that has come up again this week in my church where the pastor reminded us that things in life will change from time to time. You usually have no control over when and how much they change but change is inevitable. Things often go from good seasons where things are going well, through transition seasons and on into winter seasons where we feel life’s a mess. But they don’t even stay there and eventually they transform back to a summer season again. I think that’s a good description of my retirement as well.

On the first occasion I retired, I really enjoyed the first few weeks of rest – a kind of summer season. Things were good and I didn’t have the responsibility or stress I had endured during my working life. However, I then discovered I was now in a place where my social network had almost completely collapsed. For years my workmates were the people I’d spent most of my life with and I had little time to make friends outside of that circle. All of a sudden, all my workmates and friends had work to do and little time to have us around for dinner or meet with us socially. In addition, my identity had dramatically changed since I could no longer tell people I met what sort of job I did – the usual opening in a conversation. In fact when they did ask what I did for work, I was almost embarrassed to tell people “I didn’t do anything – I’m retired”.  So I began to feel completely lost.

That was my first winter season in retirement. I think that’s a very common situation for retirees. It’s so easy to slip into boredom and maybe even depression after you first retire. There is a lot of work involved in rebuilding your social network, meeting new people who have time for you, and rediscovering a purpose in life. Some blokes simply give up and end up sitting around watching daytime TV which will send anybody into depression.  Like all changes in life, there is a certain amount of grief that comes with the significant changes that happen when you retire. You need to expect that and plan for it before you retire!

During that first winter season, I tried to get involved with some new people in an attempt to replace my now lost social connections, but they all seemed to have their own little groups and not too many were willing to open up to someone new. I volunteered at a children’s holiday program expecting I could make a difference there but when I turned up no one had anything for me to do. I sat around feeling almost invisible for ages. Then I thought I should swept the floor, a trick I learned a long time ago – it’s something to do when there’s nothing else. But when I had finished the floor, still no one noticed so, I got in the car and drove home.

I have to say, that winter type experience was fairly difficult, but it did not last. Eventually, I found a few people who were open and willing to take me into their circle and so the winter season began to change into a spring season where there was some new hope. It wasn’t the same as before I’d retired, but it was beginning to get a bit better. And then I got a call from someone who asked me whether I’d consider a new job. Within three months, I was back in the summer season in a new job but well aware I’d need to prepare much more for the next time I retired.

So let me remind you, whatever season you are in at the moment, things will usually change as time goes on. It’s hard to remember that in the midst of a wintery blast but it is true. Sometimes it’s just a matter of waiting till the seasons change. Sometimes you have to do some work to figure out what’s important to you in your life and then to go and do whatever that is. Sometimes you have to find a whole new group of people with similar interests and get into a group with them. That may mean finding a men’s shed, or a group you can volunteer in – but choose a group that has something for you to do. Whatever your winter means for you, it is not the end of your life. Summer can come quickly and if you can find a few green shoots of hope, you can begin to see a better future again and get back the anticipation of a better life.

Of course if you are in the midst of a summer season, all the above is just as true. You should expect things will slip into an autumn season and then a winter season and that change is probably just ahead. So the bottom line is whatever season you are in, expect change and prepare as much as you can for that change.

So when I started retirement, for the second time, I was a little more prepared than I was the first time. I was conscious I needed a group of friends and it seemed easier this time to find new people to share life with – maybe because I was a bit more conscious of my needs and more deliberate in finding new friends. I have to say, I have now settled into a better pattern as well because I figured out the things that really matter to me, and I get to spend time working on things that matter and the things that help me find meaning and significance.  I hope you find those things soon because we all need them in our lives.