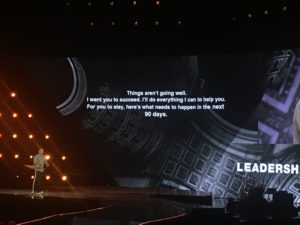 I went to a conference last week. It’s certainly not the first conference I have ever attended, nor is it likely to be the last but this conference, was not the usually business conference I used to attend – it was a church conference.

Now I suspect, you may think there were 50 people sitting around in a circle, discussing who will pay for the lunch or deciding which version of the bible is the best to study and singing “bringing in the sheaves” like they do on TV versions of church services. But that is very far from the truth.

For a start this conference was organised by the largest church in Australia. Every Sunday, they have around 15,000 people attending one of their 7 services, so they have connected with average Aussies in a new way. You would also have to say this church has a handle on logistics and volunteers since 5000 people took a week of their holidays to volunteer at the conference. And they were all smiling and happy people greeting you, showing you the way, finding you a seat, looking after people needing mobility assistance, standing behind information stands and generally being helpful.

The conference itself, had around 30,000 people attending, so there was need for many people to show you the way. Besides Australians, there were people from 60 other countries there. To sit in a stadium surrounded by so many people was eye opening. There were 4 levels of people from the floor level right up to the nose bleed seats near the rafters.  And from the start of the conference it was somewhat overwhelming (in a good way).

The music was mostly contemporary, the drums loud and the bass over the top. Sometimes the sound was like a wall hitting you. It was, at first glance, like a rock concert but this was very different! The enthusiasm of the people onstage for the lyrics they were singing was palpable. I have been to concerts where the singer was singing very emotional lyrics but they were always disconnected in some way from what they were singing. But here, everyone on stage and all the people around me seemed to be totally lost in the words they were singing – not in a dreamy way but as if they are saying “I really believe these words”. And who wouldn’t want to connect with words that say “there is something bigger than me and God is on my side.”

The stage design was fantastic as it was a stage with a round section jutting out into the audience. And because there were so many people there, the seats surrounded the stage so there would be times when you were looking at the back of the speaker or singers. The set design was fantastic with a V shaped screen at the back of the stage where the lyrics, graphics and video of the speaker appeared at the right time. There were other screens overhead for those seated in the higher seats so they too had a good view of what was going on.

The sound systems was very involved and there seemed to be two 128 channel sound desks – I assume one for front of house and the other for fold back.  Just ignore these ramblings if you don’t understand – I once worked for a TV network and so these things are important (to me.)

Then there were the world class speakers who took their place on stage. Right from the start it was obvious these people knew their stuff and wanted to convey messages of hope and expectation. They were articulate, gave positive messages and overall were very helpful to an Aussie bloke from the Gold Coast and I imagine, 30,000 others from around the world. There were messages about how to live expecting great things from God, how to lead people who are not performing and interviews with people who are changing the world.

I left the conference encouraged and determined to live better than I ever have before. And I’ll also go back next July to do it all again. I haven’t yet registered but will do so in the next week or so.  Why don’t you join me there or in London or the USA where these conferences will be repeated.