What do you do when things go wrong? 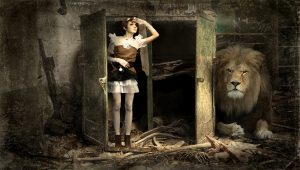 A long time ago there was a bloke named Daniel. He grew up in a well connected family. They were reasonably wealthy as far as we know. His expected his life toward out well!

Daniel was one of the brightest in his community and was good looking – a strikingly handsome man – maybe not as handsome as you, but none the less the girls thought he was The Man. He had all the potential for a top job. He was qualified to work in the palace of the king of his country. His expectations were that he would marry the right girl, bring up a wonderful family in a fancy home and be a man of influence in his community. He had all the dreams of youth and looked forward to a wonderful life.

Daniel lived in a community that was under a promise made by God years ago. “I’ll be your God, and your people will be my people.  And I will give you a promised land. I will make you a new community that will bless the world.”  That promise had been on the minds of people for hundreds of years and sometimes, it was all they had to hang onto. But that promise came with a condition. That condition was that the community would obey God and his commands. If they didn’t obey what God said, God promised to bring about punishment.  For 900 years the people had mostly obeyed God. Sometimes they wandered off the track and God would bring a correction to them and they would return to His ways. But before Daniel was born, the community began a long slow descent until they were a long way from God. So Daniel was born into a time when, despite what looked like a promising future and a good life, his future would take an entirely different path.

Nebuchadnezzar, a Babylonian king, stormed into Daniel’s city and with very little effort destroys all that is left of God’s dream for a people of His own.  The temple is now just a memory.  Its sacred contents are carried off and now used in the temples of pagan gods.

So Daniel came to adulthood and spend his whole life in a foreign land.  He’d give the best part of his life to an alien king. He lost his culture. He lost all the relationships he cherished. He had to learn to speak a foreign language, eat different food and live and die in a place he never wanted to be. He would never go home. Never raise the family of his dreams. Never take the place of influence in his own community that he once saw in his future. He even had his name changed.

How do you thrive through troubles?

So what do you do when you end up in Babylon?  That’s the place of broken dreams and the place where there is an end to the promises you once held dear. We need to answer that question because we all end up in our own Babylon sooner or later! That’s where you find yourself when things haven’t worked out they way you thought they would. When that marriage you held such high hopes for just ended. Or when that prayer you prayed for years looks like it’s answered with a “no”.  Or when the kids you had such dreams for end up on the wrong tracks. Or when the promise of a good time in retirement ends up very differently to what you expected.

There’s a field of social science involving a study of people, who experience suffering or trauma in their life. Researchers have studied soldiers involved in war from many places.  As you’d expect, many people are defeated by difficult ordeals and end up withered in their spirit.  These are valiant men and women who for reasons we don’t understand are effected badly by deep trauma. But interestingly enough, there are some people who don’t just survive these traumatic events.  They actually grow through trauma.

Researchers call these people “resilient.”  They have a capacity to thrive in challenging, difficult situations. And there are certain characteristics, that tend to mark resilient people.  When we read Daniel’s story, we see one of the most spiritually resilient men in history.

At the beginning of his life and the story in his book, we read that he lost everything.  “Nebuchadnezzar besieged Jerusalem.”   What follows is Daniel is carried off to Babylon. In Babylon, he learned  to thrive. He seems to have been carried off and given a position in Nebuchadnezzar palace. By a position my guess is it was as a slave! So what can we learn from Daniel?

Daniel lived by his values.

It seems right from the start Daniel made up his mind to live by his values. So when it came to eating the wrong diet Daniel decided he would do his best to not eat anything that his inbuilt value system said he shouldn’t. The writing about this is a bit vague. We’re not sure what was wrong with the food, but Daniel asked permission to not eat the kings food and to eat only food like his mum had given him back home. Of course this took courage but he had a discussion with his immediate “boss” and was given a 10 day trial to prove he didn’t go backwards in his health.

All of us live in Babylon of some sort.  So many people say,  “I’d get to know God better,” or “I’d get involved in helping people,” or “I’d like to build into a life of another person”  or “I’d seize life by the throat and live it to the best I can if only… – If only I weren’t so busy or If only this season in my life wasn’t so demanding or if only other people hadn’t made difficult choices.”

We all live in a world that will try to intimidate us into settling for less than God’s best.  But friends, this is your one and only life.  This is not a rehearsal – it’s all you have. And you have the right to choose to change your life today. Today is your day if you seize the chance to make it your day.

Make up your mind.

So what values do you have built in that you are not living up to? What do you need to decide today? Do you need to end a relationship that’s dishonouring God?  Then end it today. Do you need to resolve to loose weight? Then decide today is the day you stop blaming everyone else and take responsibility for your own diet. Do you need to stop being involved in unethical business practices? For goodness sake, make a decision today to do the right thing – even if it means you loose money. Do you need to spend more time with the people you love? Do you need to seek help for some issue in your life?

These may be small issues like Daniel and his diet, but let me tell you why they matter so much. In the future, Daniel and his friends had to make some very serious decisions.  There was one point where they were commanded to bow down and worship the king or be thrown into the fire.  They said,  “We choose the fire because we’re not going to bow down.” Then when Daniel was told one day, “stop praying to your God or you’ll be thrown to the lions,”   Daniel said, “Well throw me to the lions, then, because I won’t  stop.”

So, if Daniel and his friends had not drawn the line here on the issue of food, if they had not declared to the world that their allegiance belonged to God and his values, they would never have the strength to face the furnace or the lion’s den. It’s that serious.

So you need to say today  “I will honour God in the small things of my life.  I will not hand over this one and only life that God has given me to any power in Babylon, or to any person, or any relationship, or any circumstances, or any habit.  I’ll resolve in my heart that I will honour God and my values.”

It might start with a small decision about a small problem but the effect can be world changing. It will set you up for a better future. My mum used to say to me “look after the pennies and the pounds will look after themselves.” She meant if I looked after the small things the big things would be easier. So choose today to stand up for what really matters.

You can read Daniels story for yourself. He has his own book called “Daniel”. It’s in the bible around about the middle. So get out your bible and have a read. I’m sure you will find Daniels story fascinating and encouraging.