Whats so good about Good Friday? 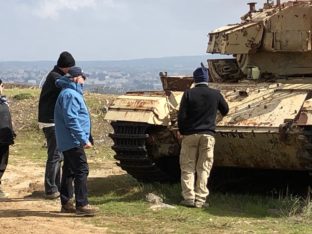 In just over a week the Western World will pause for a day we call Good Friday. This is such an important day, in many places we’ll have a public holiday to celebrate it.

So why on earth is it called “Good Friday?”

Recently we went to Israel on a holiday. After some false starts on our flights and even more on the way home because of the effects of the Coronavirus, we made it and met with some friends who had set the whole thing up for all of us.

Part of the trip they chose was a visit to the Golan Heights. We arrived at a settlement on the outskirts around 10am and transferred to an old army jeep driven by a former Israeli soldier. Our first stop was at the UN peace keepers camp. I think we were supposed to check in so they didn’t shoot us as a threat.

When we got the all clear from the Fijian soldiers, we were allowed to proceed and then the driver told us that a few days before there had been some exchange of fire over the Syrian border but it stopped yesterday and all was quite at the moment. While it was very comforting to find the shooting had stopped, it was a bit scary that it could start again at anytime.

As we travelled further and further into the demilitarised zone, we passed lots of military hardware. Much of it was from the 1967-8 war and had been sitting in the same spot ever since. Some however, was a bit more modern and looked rather threatening. We stopped at one place and went through a tunnels to get to a previously highly fortified trench running along the top of the hill overlooking Syria. From the lookout point, the guide pointed towards the barbed wire fence that formed the border and over to the town in the distance. That town, he said, was largely deserted because there were very few cars on the streets and few people ever seen moving around.

Along with the barbed wire, some landmines, signs saying if you go further you will probably die and spent bullets on the ground in various places, there was some great views of waterways, lakes and tree lined hills in the distance.

On the way out of the military zone a camouflage vehicle approached from behind and used a loudspeaker to tell us to stop. We stopped! Then the driver got out and went back to talk to the soldiers behind us. It turned out they were from the same regiment as our driver and so we departed as great friends.

Now friends that was a good day. Seeing new sights. Enjoying the company of a man who had risked everything for freedom for his country and our experiencing what it was like to be in a war zone (when no one was shooting).

Which brings us back to the question about a day we call Good Friday: What’s so good about it?

If you know the story, you know it’s a pretty horrific story. There’s betrayal, wrongful accusations, a sham trial, soldiers and people mocking Jesus. There’s persecution and torture, all leading to an unjust execution by one of the most inhuman devices ever imagined by man. And it is difficult not to feel as if we remember a tragic accident on Good Friday. Sure it was something that God in His goodness, turned into a good thing on Easter Sunday, but otherwise it was a terrible disaster. I have to admit that often on Good Friday I’ve felt like I was going to a memorial service, and I needed to be somber, and I needed to be silent.

Curiously, Jesus Himself does not speak of His crucifixion as a terrible disaster, or even of Himself as the victim of tragic accident. Just before He is arrested, Jesus says:
The hour has come for the Son of Man to be glorified (John 12:23) as if to say, this hour, the event that is about to take place will not only elicit praise and adoration. And maybe more importantly, it will reveal the very essence of who Jesus is. And by that it will reveal the very essence of who God really is.

So then what is so good about Good Friday? I think its is most clearly set out in Paul’s letter to that church in Philippi where Paul writes: In your relationships with one another, have the same attitude of mind Christ Jesus had, Who, being in very nature God, did not consider equality with God something to be grasped; rather, He made Himself nothing by taking the very nature of a servant, being made in human likeness. And being found in appearance as a human being, He humbled Himself by becoming obedient to death— even death on a cross!
Therefore God exalted Him to the highest place and gave Him the name that is above every name, that at the name of Jesus every knee should bow, in heaven and on earth and under the earth, and every tongue acknowledge that Jesus Christ is Lord, to the glory of God the Father. (Philippians 2:5-11)

If you think carefully about the contents of these verses you might hear, as the Philippians did, what makes Good Friday worth celebrating. Many scholars believe this text from Philippians 2 is an early Christian hymn, something written and used in worship by the first Christian churches. So perhaps it’s a window into the way the early church understood and celebrated the person and work of God.

But the story hinges on a decision made before the universe began. That is Jesus, who was in every way God, did not consider “equality with God something to be grasped”  not something to be held onto. So that decision is what makes Good Friday good. He would have known that if he came into the world, it would upset the order of things. That upset, would eventually mean he would be killed like so many others who have challenged the established authorities. But that he chose to go down that path, despite knowing that so that you and I can find real freedom. He chose to come and make a way for us to find joy and to start our lives again with a blank sheet. So as a result, we can today find freedom like never before. That surely is something good and worth celebrating.