When Your Colour Pictures are Wrong

Last time we were in the USA, we were taken to Antelope Canyon in the Arizona. We were told it was a slot canyon. I had no idea what that meant so I said “great”. It turned out a slot canyon is exactly like the mane implies. Its a slot cut into the landscape by the action of fast flowing water which produces a crevice of varying widths and with strange shapes cut into the rock. Antelope canyon is a really spectacular place to visit and is well worth the drive to get there. You get to stand between red sandstone walls up to 20m in height in gaps between a few inches and a few metres and it is a great place for photographers. 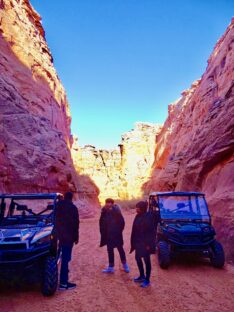 However one of the issues I faced with the pictures I took was, they were far too blue. I knew I could fix it on the spot, because it involved a camera setting. Unfortunately, I’d forgotten about it over the years. Its called  the colour temperature settings on my camera. But Murphys law intervened so I couldn’t find that setting on that day. Perhaps this tells me my camera is still too complicated!

What on Earth is Colour Temperature?

A long time ago when I used film cameras, I had to decide, before I took a photograph, how much time to expose the film for (shutter speed) and lens iris opening (F stop) as well as the focus.  But I never had to decide what colour temperature to use. That was taken care of by the film I was using. Mostly I used daylight film which means the camera expected the light coming into the lens to be the same colour as daylight. So if I took pictures under a cloudy sky, where the colour of the light was not the same as daylight I got pictures that were too blue. When taking pictures indoor under incandescent light, I had to use a daylight flash to overcome the distinct red shift that occurred in the picture. Of course fluro lamps gave different results depending on whether they were daylight or warm tubes. When taking pictures under mixed fluro and incandescent, most of the colours were just wrong!

But today, it is different! The cameras automatically adjust almost everything and there are so many options in taking a picture today, its just easier to use the Auto mode . That means, amongst other things, the camera measures the colour of the incoming light and adjusts the sensors to compensate for any changes. So, now I can take a picture under clouds and it is almost the same as one taken in daylight. But, it also means that pictures of sunsets, tend to be less red in the photos than they should be, because the auto colour temperature adjustment tries to compensate for the increase in red light coming from the sunset. Because it’s simple to do, I later use my computer to adjust all my sunset picture, to compensate for my cameras incorrect settings. I imagine it works that way for sunrise too, but don’t often see the sun rise! However, because I know how to make a sunset picture look better by adjusting my computer, I never needed to find out how to manually set the colour temperature in my camera.

So standing in the bottom of the Antelope canyon, I was standing amongst 30m high red sandstone walls and the light I could see, was sunlight bouncing off the walls. So, as you can imagine, in the Auto mode, the camera adjusted the colour temperature to compensate for the extra red coming from the cliffs. This was a severe adjustment so the image took on a blue hue. As you can see in this picture, the less bouncing around the sunlight did, the more correct the colour.

How to Correct It

Conveniently for many people, there were Navajo guides standing at strategic places who offered to set the cameras to manual mode because they have this problem every day. Unfortunately, they never figured out in the few moments they had with my camera, how to adjust it so they gave it back to me. I tried but it was too complicated to work out on the spot so I mostly used the flash. 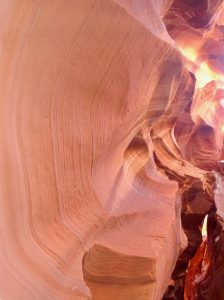 The best results were obtained by using the camera flash. That means the camera knew what colour the light was leaving the camera and so automatically set the sensors for that colour temperature. So any photos taken with the flash were true to the colours of the scene in which I was standing. Of course the light falls off as the distance from the camera increases so there are problems with exposure using a flash – especially the inbuilt one.

Work It Out Now