Where Did Ayers Rock (Uluru) Come From? 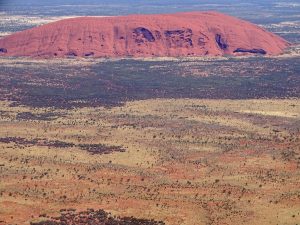 Uluru is a place on many Australians bucket list and it is a great place to visit – except in summer when it’s very hot.  You can see the rock from the special vantage points set up for sunrise or sunset. You can walk around the rock and explore the ancient caves and water holes on a guided walk or on your own. You can also drive another 50Km to see Kata Tjuta and walk the many tracks around that rocky outcrop as well.

A visit to this place can help confirm your view of the world or might even help reshape it. Whatever your view, it represents a clash between at least three world views.

Geologists see it as a place where over millions of years huge amounts of sand were deposited from the Peterman Ranges to the west of Kata Tjuta. Then when the area was covered by a great sea (around 500 million years ago) the sand had mud deposited onto it. Over time the pressure of the water and mud compressed the sand into rock.  After the sea disappeared, some great tectonic shifts occurred and forced layers of sandstone that had been deposited over those millions of years, to turn almost 90 degree turn into the current position.

On the other hand, the Anangu people believe that in the dreamtime, some ancient animals were fighting. At the Cultural Centre in the Park, you can hear about the actions of Kuniya (Woma python), Liru (poisonous snake), Mala (rufous hare-wallaby) and Lungkata (Centralian blue-tongue lizard). You can even see the evidence of their past activities in the still visible spear holes and markings in the rock .  The exact story is only known to the Anangu people who have a very long history in this area – in fact they have been here since before agriculture began in Europe.

Some people see a third explanation that has to do with Noah’s flood. They agree to a certain extent with the geologists that sand was washed into a vast depression, and that it had been scoured from the nearby ranges. But, they say “the whole process must have been catastrophically rapid. One only has to consider the amount and force of water needed to dump some 6,000 m (approx. 20,000 ft) of sand, probably in only a matter of hours, after already having carried this sand some 100 km (63 miles), to realise that such an event had to be a catastrophic flood.”  They see proof of this flood by the sea creatures from the past frozen high into the rock at various places.  You can read more about this explanation here. 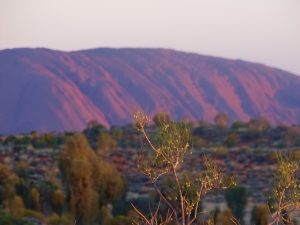 Which Explanation is Correct?

As you stand and look at the rock, you can’t help but be amazed by the sight you see, and just maybe, you’ll see the layers of sandstone washed in during a great flood, or over millions of years, or maybe animal shape and spear holes still there today. So that brings us to the question “how do you know which explanation is correct?” Or maybe the question should be “How do you know anything you know?”

I guess we non-aboriginal people tend to see things with a scientific bias. That means, we can calculate the erosion rate of the sandstone in the area and calculate how long it would take to erode the rocks into the shapes we see today. We can also see evidence of fossilised sea shells and other creatures from time to time and can work out roughly how long its been since a sea covered this area. But the truth is none of us know.  None of us were there 400 million years ago.  None of us experienced the rise of Uluru from the desert sands. And not too many of us can calculate erosion rates, deposit rates and tectonic forces. We are all relying on what we have been told. Someone, somewhere said this is what happened, and we choose to believe it because it fits our world view.

But that means, dreamtime stories are just as reasonable as the ideas of erosion, tectonic forces and a sea that disappeared. They seem, after all, to have originated a very long time ago by people who were closer to the events than we are.

Of course there may be another explanation as well. In a discussion I had with a man from Northern Queensland, he suggested, with absolutely no evidence, all these explanations are all wrong and Uluru is actually a UFO that crashed a few years ago. 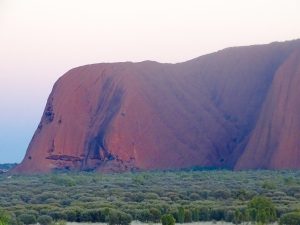 How do We Know?

There is a branch of philosophy that tries to answer the question “How do we know?” It’s called epistemology. My understanding is a bit limited, but here is a quote from the Stanford Encyclopaedia of Philosophy…

What I think they are saying is’ that contrary to the common view that religious people are people of faith – everybody has to have faith in something to believe it. So its really up to you.  You can put your faith in geologists, in a God who created everything, or in the ancient stories passed down through the generations. Which do you believe contains the most truth?  It’s all to do with what you have faith in! The answer will lead you to accepting, as fact, the explanations you believe for the creation of Uluru (and everything else).