2018 was the year for our family white Christmas. For people from hot and steamy Queensland in Australia, this was a long standing bucket list item. When we left Brisbane airport it was 32 degree Celsius. When we got out of the aircraft in Calgary it was -24 degrees. So the change was dramatic but expected.

This trip had been in the planning stages since about October the previous year when we first mentioned it to our family. There are only a few places in the world where you can guarantee a white Christmas and the family agreed Canada was the one for us.

The first stage was to choose a hotel or three! Our plan was to visit Lake Louise in Alberta. We had been there before in summer but never in winter.

So we started looking for accommodation in Lake Louise at the big hotel on the edge of the lake  – the Fairmont. When they released their rooms about a year in advance they were about $300 per night. I rang to enquire about the best options for our four different sized families and not only was given the cheapest option – which would have been great, but I was warned the prices would rise when they reached a certain (unexplained) booking threshold. Unfortunately that threshold was reached within a few days, so the rooms were then $600 per night and our booking went from several possible nights to only one night. We found another hotel which was great and just down the road for around $250 per night. There were other hotels required for the first and last nights in Calgary which is a 3 hour drive from Lake Louise and we planned a few nights in Banff about an hour away.

The Flights.
Next we booked the flights. Two families left together from Brisbane to fly directly to LA and then to Calgary. Around Christmas the fares are, not surprisingly a fair bit more expensive than the advertised fares you hear about through the year. One family found a “cheap” premium economy flight via New Zealand and our fourth couple left from Sydney for Vancouver then on to Calgary. The hardest part was coordinating the holidays for four families. 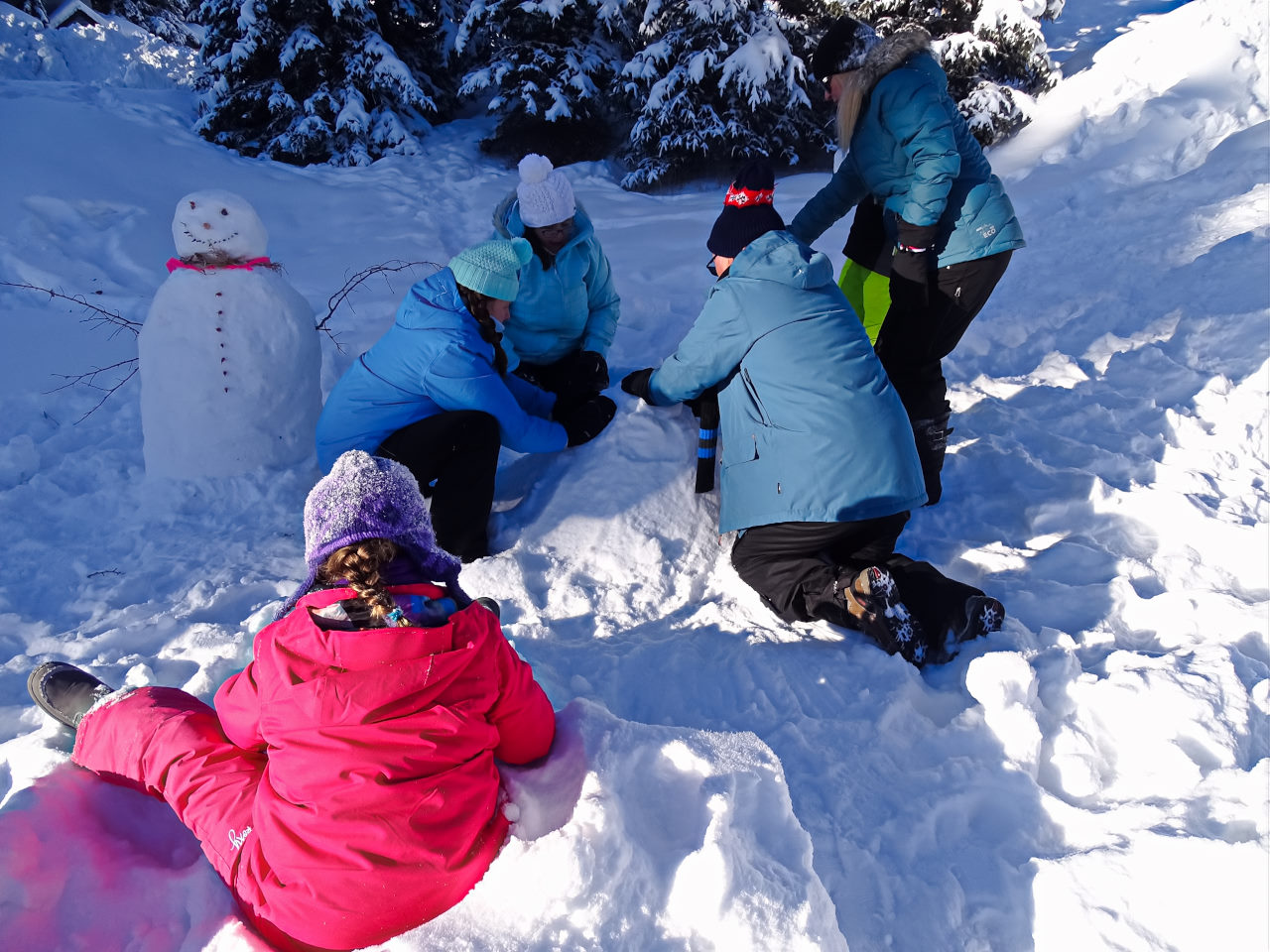 Flying into Calgary was easy enough and finding our bags had followed us was a bonus. Two families travelled together so that meant we could keep an eye on each other for the flight.

Our first night in the Calgary hotel meant we could play in the snow and gaze out into the frozen world just out the window. The next day we met up with family three and their hire car which was big enough for the 7 people who needed to go but not if they all had a large suitcase. So we helped out by taking two extra bags with us on the bus. The bus driver commented on how much luggage we had but was helpful in packing it away under the bus.

The bus from Calgary to Lake Louise takes you through some stunning scenery. I think we took around two hundred pictures on the way. Of course the bus was heated but not overly so and we kept our heavy coats on all the way. It was fairly late by the time we arrived so after checking in, we gathered in the restaurant for dinner then went back to our rooms and to bed.

Waking up in Lake Louise on Christmas morning was exciting and exhilarating at the same time. We were up in the dark – even though it was 7am. After a gift exchange, the two keen skiers headed off to the mountains and the rest of us enjoyed building our first ever snowman and having a snow ball fight. The smaller grandkids really loved their time in the snow making snow angels, throwing snow at everyone and having as much fun as possible.

One thing I learned on day one, was why so few Canadians in these cold places wear glasses. They fog up badly! So, you have a choice – not cover your nose and mouth and thus freeze your face in 30 seconds flat, or cover your mouth and watch the world rapidly fade to white since in – 25 temperatures the fog from your breath becomes ice on you glasses instantly. So, if you are ever planning to do what we did, go to optometrist and get yourself some contact lenses. Believe me it will be worth it. I might also add my glasses have a tinting coating so they go dark in bright sunlight AND it seems very cold temperatures. 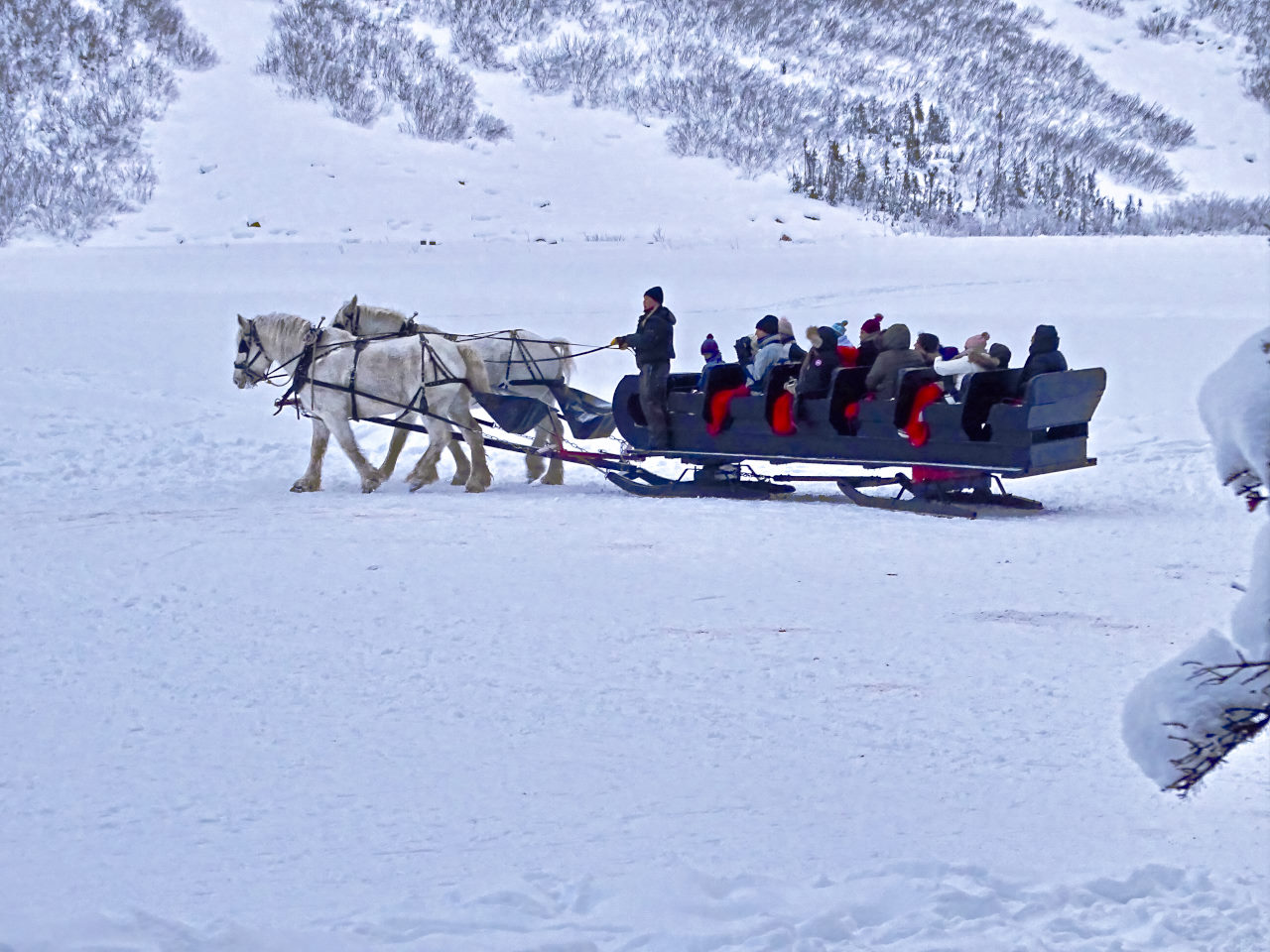 The other very important thing is get some gloves that are a tight fit on your fingers and not too long for them – especially your index finger. I had two pairs with me. One pair was great at keeping my hands warm but were fairly tight to get on and off. However the index finger was a bit generous in length, so I had to take them off often to clean my glasses or press the buttons on my camera or my phone! You can get inner gloves with pads to operate phones and they would be good if you have the right outer gloves. So pay attention to your gloves.

There are plenty of people who will tell you the Aldi ski jackets are not good enough. That means “they seem too cheap to be any good” but they worked well for both of us. My wife brought along an expensive borrowed jacket as well but the cheap one kept her warm enough. She also had Aldi boots which also worked well. The key to the boots is the tread – you must have a pair with a tread that will minimise your slipping on the ice. You can always add extra socks if they don’t work too well thermally and even a plastic bag over your socks if your boots aren’t water proof. Both of us wore layers of thermal underwear and I had on a shirt, a jumper and a jacket or two as well. I could stay out for an hour or so before my fingers and toes got too cold. 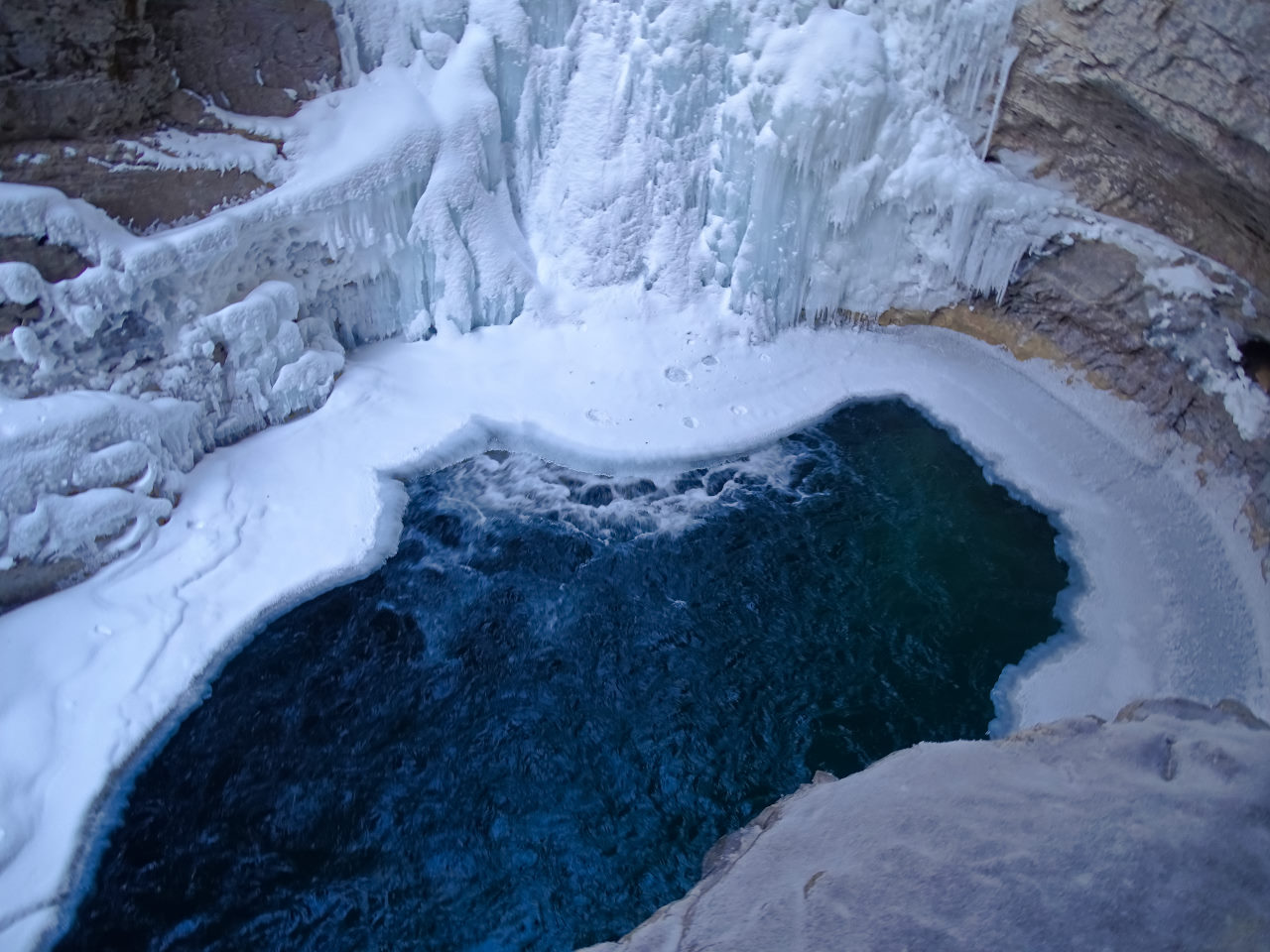 The other problem is batteries! My iPhone battery lasted well because I kept it in an inside pocket. My daughters lasted one photo outside then had to be warmed up so some charge came back. My camera battery held up reasonably well though the temperature shortened the life by at least 50%.  I had two spare batteries in an inner pocket which I used from time to time. I would have been better off with a USB power pack in my inner pocket and a cable to my camera or phone. Even though my camera battery is inside the handgrip it didn’t get much help from my body warmth with gloves on!

Towards the end of the time in the snow I realised I may have been able to keep a spare battery in my camera case wrapped up in a hand warmer – one of those $2 chemical packs that can be bought anywhere there’s a shop in very cold places.

So should you plan a white Christmas sometime? YES and I think you should do it as soon as you can get your family organised. If I had to choose between buying a new car and a white Christmas trip with the family, I’d choose the white Christmas trip every time. In addition to the trip itself, you also get a year of anticipation and choosing and planning and making it all happen. And isn’t the idea of travel really appealing after the last couple of years we have had!