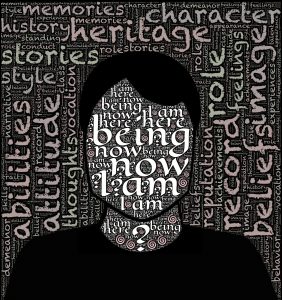 The most important question.

I think it’s so important for each of us to know who we are before we go through another day because it helps us identify what is important in our lives and helps us work out what to do with our time. It also tells us what is the centre of our lives. So who are you really?

What you used to say.

Now during your work life you probably would answer “I’m Bob the builder” (assuming that your name was Bob and you knew something about carpentry). But in retirement one of those things is not available.

Maybe you answer the question by some activity you are involved in – “I’m Bob the bikie”, or “Bob the golfer or fisherman.” In answering that question, you often give away the things that are at the centre of your life. It tells me a lot about what you think is important in life. For example if you said “I’m Bob the self funded retiree,” that tells me you think money is vital to your security. Or if you said you were “Bob the retired CEO” that tells me power or position was pretty important to you and probably still is. How you answer that question gives away more than you think.

Then some people answer  “I’m Bob the former builder”. That an easy thing to say in retirement but tells me your focus is behind you on what you used to be or do. Most of us fall into that trap from time to time but it may indicate you are not as happy with your present situation as you were in the past.

The unfortunate thing about my past is that it’s not all good. Maybe there were some good old days but for many of us there are some bad old days mixed in. And even in the good old days I wasn’t always living the good life.

So who are you right now?

This problem is not just a problem of this age but has been around for a very long time. In the Bible there is the story of a man called Gideon. At the beginning of the story, Gideon was having an identity crisis. He thought he was someone very different from the way he turned out. The story begins with Gideon threshing wheat in a wine press. Now if you know anything about ancient threshing processes, you would know that it is done in the open air so the wind can blow away the chaff. But Gideon is in the wine press (most likely a sort of large barrel set in the ground) threshing wheat  to “save it from the Midianites” who were the occupying force at the time.

Into this unlikely situation of a man hiding in a wine press, an angel appeared and said to him “The Lord is with you o mighty warrior”. So the angel saw something in Gideon that even Gideon himself never saw. He saw a warrior not just a man hiding in the wine press.

You can read the rest of the conversation in the book of Judges chapter 6. But Gideon answers the angel with an accusation that he feels abandoned by God, that he is a weakling and from the weakest tribe in the land and he really can’t deliver anybody as the angel goes on to tell him – he was probably suggesting the angel has got the wrong address!

Now the rest of the story up to the battle Gideon leads, is really about Gideon being held back by believing he was not what God thought he was. Even though he was given a fairly spectacular indication that God was serious about him when the angel touched some meat and grain with a stick and the rock it was on burst into flame. But even then, he asked for a couple of other signs to make sure God hadn’t made some mistake. Gideon had a serious identity crisis. Who he thought he was in fact was much less than he really was.

How God sees me.

I’m not sure what you think of yourself. But I do know from my own experience that God sees me very differently to the way I see myself. I believe God sees in my future something better than my past has been. He has always seen something good in me even on my worst day. In fact right in the middle of my worst times, He has been beside me watching me and loving me. And because I am forgiven, He is no longer concerned with my past and is really only interested in where I’m going.  I believe He has got lots of things for me to do before we meet face to face and I for one am determined to do all I can to meet His expectations. That probably means sooner or later I will have to adjust my expectations to meet His requirements of me so I can play the role He designed just for me. And the sooner I get my view of who I am lined up with His view of who I am, the better off I will be.

so who are you? Or maybe I should ask who does God thunk you are. The answer might surprise you and maybe even scare you but I believe God sees a great man inside of us if we are willing to step up and take on the challenges He has put ahead of us. We can all reach for a higher level if living and when we do- we will reach great heights and do great things.

So why not go for it. If you’re retired you have the time to put into achieving things you hadn’t even dreamed of before.